Hello and welcome back to what is an exciting article covering a one of a kind caricature drawn by the one and only, Duff Tweed.

Today, we were contacted by Dwight in who was kind enough to share his story and actual pictures of the unique caricature done by Duff Tweed.  This piece pre-dates any and all items shared in this blog.  We couldn’t wait to post this story and pictures.

Today, Dwight and his son in were discussing Dwight’s father.  His son had asked him what his grandfather did in “wide-open” back in the 1940’s and 50’s.  Dwight explained the story to his son which we will share below   It’s these kind of stories that make writing this blog so rewarding.  Truly a gift from Dwight to all of you. Enjoy!

I was just telling my son about his grandfather, my dad, and his early years in a 'wide-open' . I showed my son a caricature of my dad that Duff Tweed did in one of the nightclubs - undoubtedly before Duff went to .

I am wondering if you would be interested in seeing it?

Well, yes, we certainly were interested and here is what Dwight shared:

My dad was the eldest son born to an immigrant family from . His dad was in the 'rag and bone trade' - that is, Grandfather drove a horse and cart around the wealthy neighborhoods of the city and 'recycled' discarded furniture and scrap metal that he found. He died when my dad was around 16 years old - leaving Dad as the principal breadwinner for his mother and 4 younger siblings. Dad, a very promising student, left high school and found work as a 'chalk boy' for a large bookmaking operation - writing up the odds and results on a blackboard - just like in the movie, The Sting. He rose to become quite a popular and successful figure in the wide open scene of the 40's and 50's.

Dad knew Duff from the nightclub scene where Duff would do caricatures of the people that were a part of that era that Mordecai Richler has written about. Many of the actual characters from The Apprenticeship of Duddy Kravitz were well known to my family. In fact, Dad used to refer to Richler as 'that kid who followed us around and scribbled notes' about the comings and goings of the older boys.

This caricature by Duff shows my smiling and confident dad in tails, with a cocktail in hand.

I was telling this story to my son today over breakfast when he asked me what his grandfather, who he never met, did for a living. When I showed him the caricature, my son decided to 'Google' Duff Tweed. Little did we know that Duff must have moved out to only to become part of Disney legend.

Its a thrill to share this with you. I had to angle the picture due to reflection from the glass - and also did a closeup of the signature.

What a great story rich in color and history.  We feel privileged to share it with you.  Now for the eye candy!  Without any further delay here is Dwight’s Fathers Caricature drawn and signed by Duff Tweed:

What a fantastic piece of Duffy history!

UPDATE, December 18, 2012:  Dwight just sent us this beautiful computer scan of the same caricature.  Now you can really see it clearly.  Thank you once again Dwight!  This is awesome! 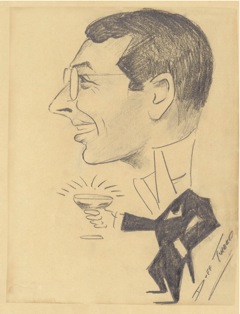 We’re making a huge “SHOUT OUT” to Dwight and his son for sharing this truly unique piece of Duff Tweed’s history.  Thank you!!!!

We were previously made aware that Duff had worked in a bomb making factory in  as a bomb checker years before joining Walt Disney Studios.  Back then when he had to report something, he was known for illustrating the issue as opposed to writing words to describe that same issue.  We now know, thanks to Dwight and family, that Duff also did caricatures of local neighbors and friends.  Thank you Dwight for sharing this truly special story and caricature!  It will live here for all the world to see!

Readers, if you’re family came from or you still live there, go ask your older relatives about Duff Tweed.  You may just have a treasure sitting in Grandpa’s or Grandma’s attic.

Wishing you all the best for the coming winter! Stay warm, stay happy and come back soon!

All the best!
-Joe
Posted by Duff Tweed Carvings at 1:36 PM No comments: