Welcome back!  Yes, we've been busy at Duff Tweed Carvings and have three new carvings to share. All three carvings are compliments of Alex in Downey, California.  Alex purchased these three pieces directly from Duff Tweed in 1968 and shares the following:
I bought them from Duff in 1968 in Pasadena and they have been in storage ever since.  I remember he had several for sale that day and I asked him which were his favorites and why.  He pointed to these and when I asked why,he answered "because their faces tell it all".  I bought them immediately.  Unfortunately I moved around the country for a while and never had a worthy place to display them.
-Alex

First we have Double Jigger Jack Grant in a really cool black and red jacket. 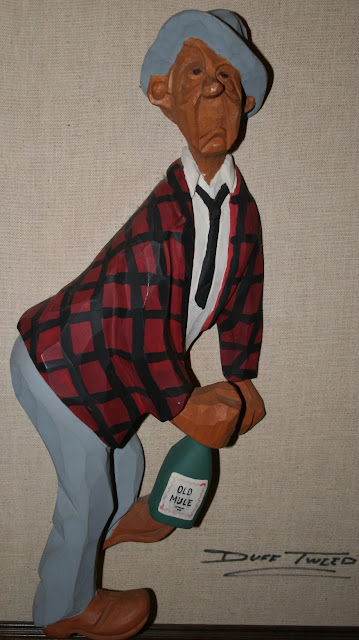 Jack loves is hootch and in this carving he is drinking Old Mule. 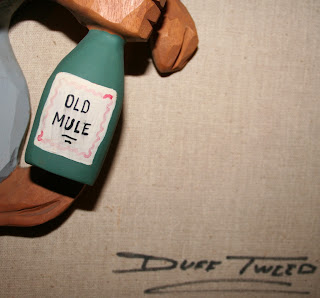 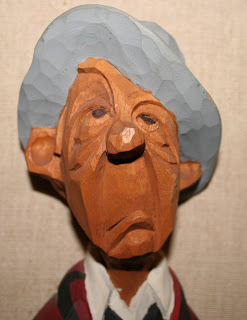 Look at how clean and pristine this carving is.  Alex took great care of all three carvings.
Here are two other carvings of Double Jigger Jack Grant for comparison purposes:﻿
﻿ 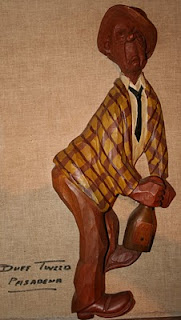 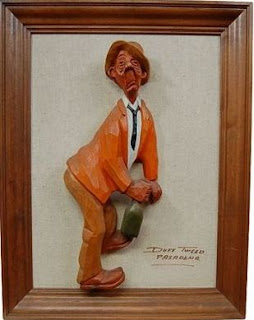 Next we are proud to share Sue The Bastards.  Good things come to those who wait!  We had watched this item sell about a year ago on Ebay and regretted having not bid on it.  Then like magic, it appeared.
Alex informed us that while there are many golfer sets carved by Duff Tweed, Sue the Bastards was carved in a much lower number of editions.  As with all Duff Tweed carvings, we're not sure how many Duff created in his lifetime﻿, but owners and collectors are getting a pretty good idea over time. 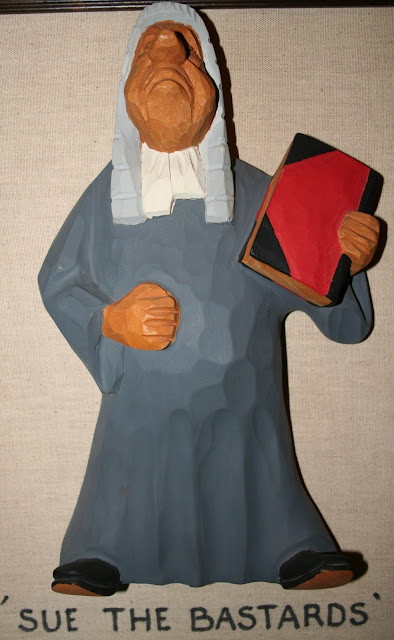 I wouldn't want to mess with this guy!  Below is a close-up. 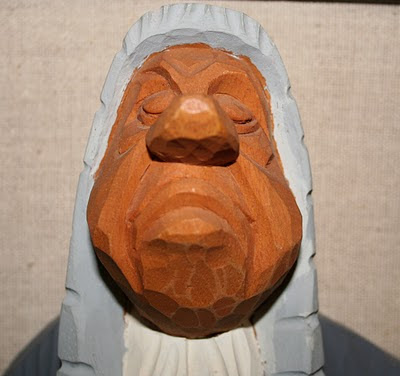 Last, but certainly not least is The Low Bidder.  We have another low bidder/hobo carving, but it is not titled.  Additionally we watched one sell on Ebay earlier this year.  We'll post pictures of each below. 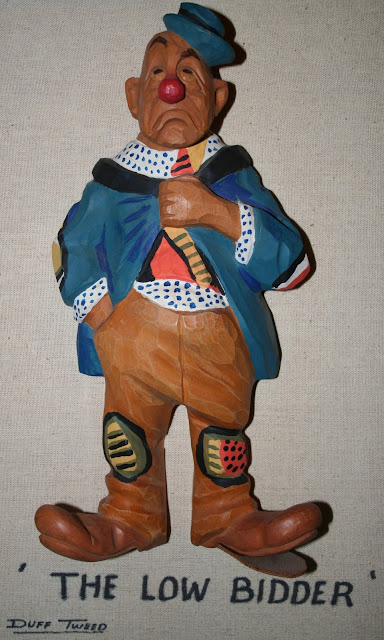 What a great paint job!  You have to appreciate Duff's attention to detail.  Check out his left foot where his shoe sole is separating.
﻿ 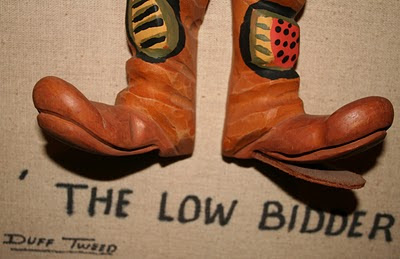 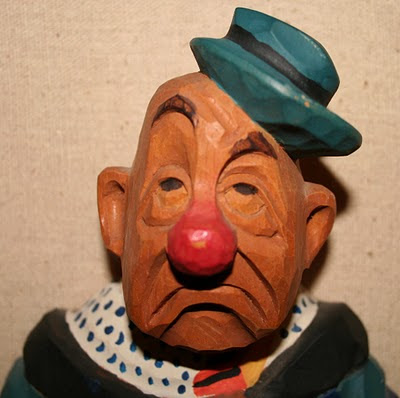 Pictured below are all three Low Bidders. 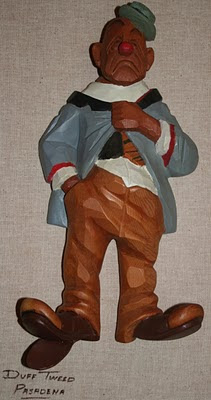 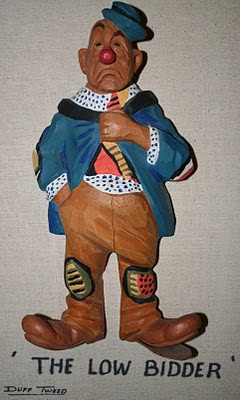 We would like to extend our sincerest thanks to Alex in Downey for caring so well for these pieces for all these years.  Additionally a big THANK YOU is in order for his willingness to share what he learned about Duff Tweed﻿ and for allowing us to add his special carvings to the collection.
THANK YOU ALEX, it was a pleasure meeting you!!!
We'll be back soon with more Duffalicous tales!
All the Best!
-Joe﻿
Posted by Duff Tweed Carvings at 12:14 PM No comments:

On November 12, 2010 Warren in Canada contacted us at Duff Tweed Carvings. He shared a second set of what we had previously believed to be a one of a kind carving by Duff Tweed.  We paid a lot more than Warren did for the set we own and titled it Duff Tweed's Poker Players (Please see previous blog dated July 14, 2010).  Warren found his set at the Salvation Army a few days before contacting us for guess how much?  We'll tell you at the bottom of this blog, but don't jump ahead as there is too much good Duff stuff in between!

Since Warren was kind enough to contact us to share his great find, we have named this blog "Card Player's" as he so aptly titled them.  In this manner we may differentiate his piece from ours for description purposes.  It will also make it easier for Warren to share his piece with the world! 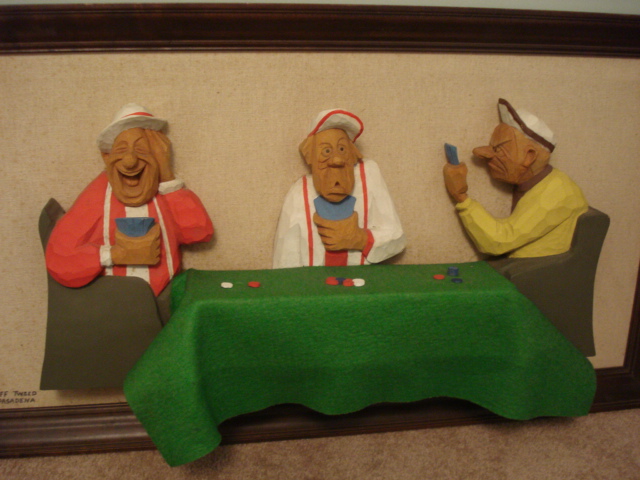 What we first appreciated about Warren's set of Duff Tweed's Card Players was how clean it was.  The characters, frame and background look extremely clean.  However, this piece is signed '83 which is three years before Mr. Tweed's passing, and much later than all the other pieces we have shared in this blog.
Warren's piece looks extremely similar to the one in our Duff Tweed collection, but as you look closely you'll notice slight differences in the carves that form expression as well as the obvious differences in the painting.  The table cloth looks to be a different color as well.

Pictured above is Poker Player's and above that is Warren's Card Players for comparison purposes.  Warren's set has the green felt table and the Duff Tweed Carvings set has the teal felt.
Here are some close-ups of the carved characters Warren so kindly shared with us: 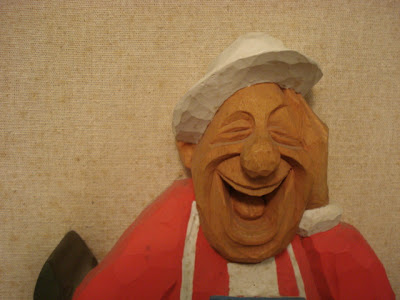 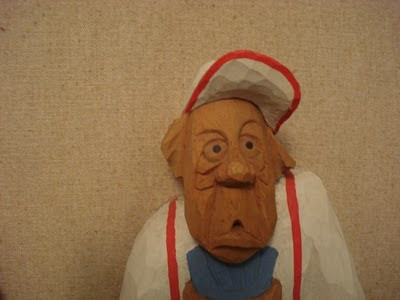 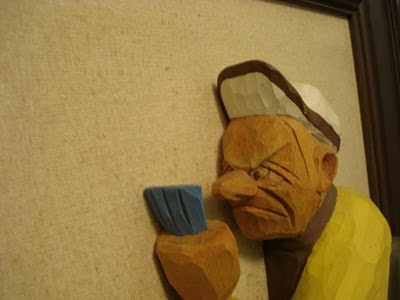 Just below, Warren shares Duff's dedication to Margie who obviously purchased or was gifted the set of three carvings from Duff in 1983: 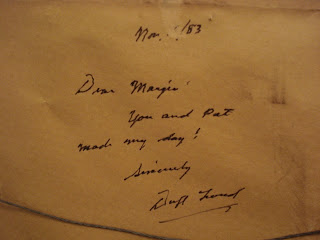 Above reads as:
Nov 83
Dear Margie  - You and Pat made my day!  - Sincerely  Duff Tweed
Really wish we had met Duff before his passing and had the opportunity to have a personally dedicated piece!  How cool!  Even better, just to sit and talk with the man. 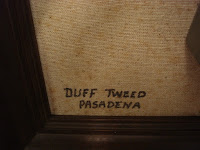 ﻿OK, last comments on this piece.  We thought it was pretty neat that Duff who was Canadian born actually made this piece in Pasadena, California, but it found it's way back to Canada.  Many of us who are collectors wonder just how many pieces did Duff Tweed carve in his lifetime? That answer may always be a mystery to us.
A big shout out and THANK YOU to Warren in Canada for sharing his piece with the world!  Warren purchased his Duff Tweed Card Players for $25 at the Salvation Army.  Sweet Salvation!  Fantastic find Warren! :-)
Keep bringing us your incredible Duffy finds and stories.
Happy Holidays and Happy Duffing!
All the best!
-Joe
Posted by Duff Tweed Carvings at 10:54 AM No comments:

It's stories like this that inspired me to create this blog.  I always do and will continue to applaud those willing to share.

Recently, I received an email inquiring from what wood were Duff Tweed carvings made.  The owner of a Duff Tweed carving went on to explain that they were replacing a hand that had fallen off their Duffy cowboy carving.  So I replied pine wood was what Duff used and suggested she might not want to replace the hand as Duff himself would not have carved it.  I really thought nothing of it and just went on with my daily routine.
Then, today all the pieces fell into place.  Nikki, who had first contacted me about replacing the hand sent pictures today and completed the story, so I couldn't help but share her never seen in this blog Duff Tweed Gunslinging Cowboy.  I don't know which is better, the cowboy or the story.
So here's how I learned what had happened.
First email received from Nikki:
Hi.
Wondering if you could answer a question for me?
What type of wood did Duff Tweed carve with?
I have a mounted cowboy (the type that were painted) whose hand fell off. Then my dog ate it.
I want to have another hand carved, and was wondering what wood to use.
Any help would be greatly appreciated.
Thanks.
~Nikki


At this point I had not seen the carving and assumed it was one of the members of the Slaughterhouse Four.  The part that her dog ate the hand, just made me laugh.  I replied to Nikki and waited for a response.
Today I received a response from Nikki:
Hi Joe,

Thanks for your reply; attached are photos of my Duff Tweed Cowboy.

History: Two Duff Tweed carvings hung in my husband's bedroom as a child when his family lived in Palos Verdes in the early 1970s. This is where they were purchased. His brother currently has the other one.   Bummer about the hand. I'm going to have a new one carved so he's complete. It's nice that the piece does not need to be glued on, it simply slips onto the little post in his arm.
Great blog!


Nikki replied once again after I asked her permission to tell her story. Her dog's name is Rex, and he is an 11 year old black lab.  Gives new meaning to the saying, "Never bite the hand that feeds you".  I wonder how many years Rex sat there watching that hand dangle til it fell off and he ate it?  Sweet victory for Rex; not so much for Duff *laugh*.  Rex is now part lab and part Duff Tweed carving as there is no way all that wood came out and will be auctioned on Ebay starting at $99.99 plus shipping and handling. No, seriously, Rex is fine! 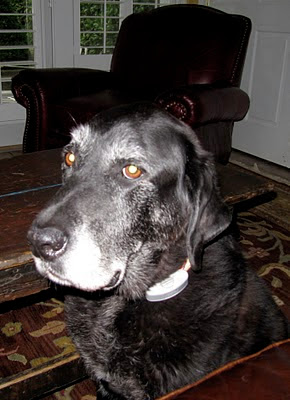 Now for the part I know all you collector's have been waiting for, here's Duff Tweed's Gunslinging Cowboy.  At least that's what we're calling him until we learn otherwise. :-) 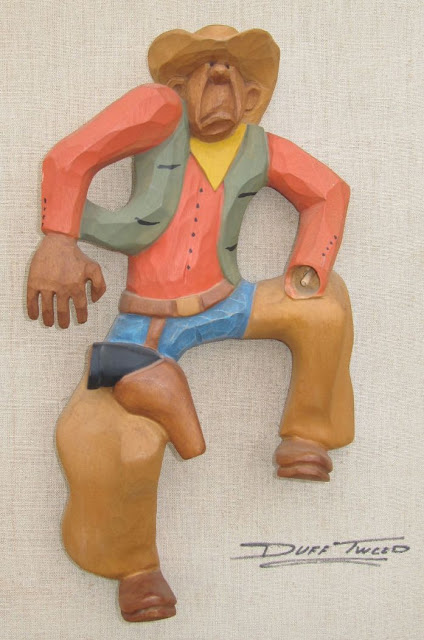 He is way cool!  Nikki, thank you for sharing.  It's greatly appreciated.  UPDATE: This evening I was informed by a previous seller of Duff Tweed carvings that this cowboy was originally designed for Gene Autry. This is one of Mr. Tweeds versions of this carving as he hand carved multiples of most of his wonderful characters.
Hope you enjoyed this newest posting to the Duff Tweed collection and Happy Thanksgiving to all!
All the best!
-Joe
Posted by Duff Tweed Carvings at 3:15 PM No comments: