Welcome and hope you had a great Memorial Day weekend!
Yesterday, we had some Blue Angels or similar fighter jets flying overhead here in Los Angeles.  Loud would be an understatement.  We also saw a lot of sky writing with the same symbol; a circle with an "x" through it.  My wife and daughter thought it was a "hug" and a "kiss", while I thought they were playing a high tech game of tic-tac-toe, but it turned out to be a promotional campaign for the new X-Men movie.
Check it out. . . 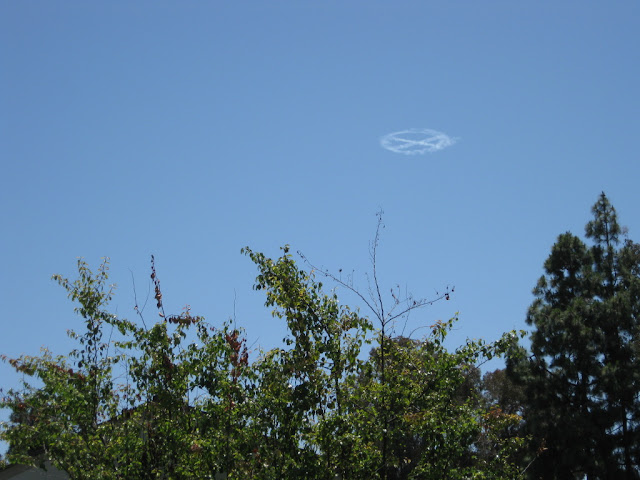 Additionally, today is Clint Eastwood's 81st Birthday, so we'll attempt to slip in some "Eastwood" related comments and liven up the blog a bit.  Happy Birthday Clint, you're the man!
Today we will share two different carvings that our good 'ol friend at Rust Trap Ranch (R.T.R.) has recently acquired.  These come to us from Mike in Paso Robles, California.  We spoke with Mike and he had a somewhat tragic Duff Tweed story to share.  Apparently, while Mike was on the phone with Rust Trap Ranch, he was describing one of the Wall Street Hobos and it literally fell out of his hands and broke (so sad), so the price dropped immediately as well.  "A good man always knows his limitations." Mike first contacted us via email and shared his two pieces with us inquiring if we might like to purchase them.  We of course responded, "Go ahead, make my day!".  Well, when Mike did eventually get back to us, he shared that he had already sold the two carvings to someone else.

That someone else was Gary at Rust Trap Ranch and he has agreed to work out a deal so we can add one of the two pieces to the collection. We are truly appreciative!  We have been working with R.T.R. to build both of our collections and not compete for them. Gary's collection has grown significantly in the last year. He also owns a set of the Slaughterhouse Four previously owned by Roy Rogers.  "I know what you're thinking. Did Gary add six carvings or only five? Well to tell you the truth in all this excitement I've kinda lost track myself. But being this is Duff Tweed Carvings - the most powerful Duff Tweed blog in the world, you've got to ask yourself one question--Do I feel lucky? Well, do ya punk!"

First, we'll show you the piece that broke, but this picture was taken prior to the damage: 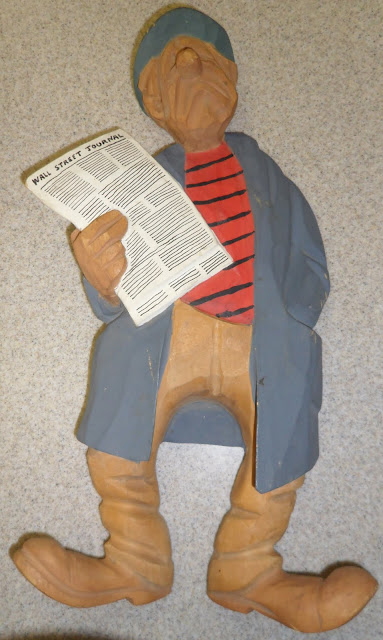 Apparently the foot broke off, but R.T.R. will have it repaired.  This is an excellent quality version of the Wall Street Hobo as it is the clearest and darkest painted wording we have ever seen.  Most of the words painted on Duff's carvings are significantly faded.  This one looks brand new!
Next we have another version of the Wall Street Hobo leaning on a post.  This is the only picture we have of this particular carving and we have never seen this one before.  It's becoming apparent, Duff carved a lot of hobos. 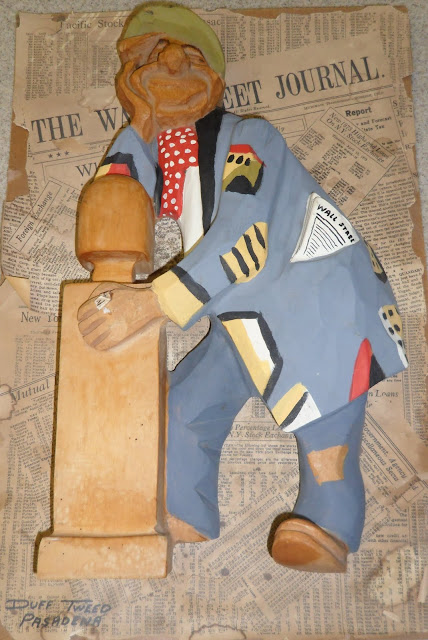 This carving has pieces of the Wall Street Journal in the background and is signed "DUFF TWEED - PASADENA".  The paper has many water stains and the hobo could use a shower.  You probably noticed that neither piece sits on a frame.  In speaking with Mike, we learned that he acquired these through buying the contents of an abandoned rental space.  We continue to see people finding these carvings stacked in old boxes in attics, at Salvation Army's, in rental spaces and in the homes of people 70+.  It's interesting and greatly appreciated how the older generations continue to give back to the younger ones.
We know we mixed it up a bit in today's blog, but it's been a while since we wrote or had anything Duffy to write about.  In closing, we'll leave you with one last Clint Eastwood quote:
"And so, as our friends south of the border say, adios amigos."
All the best!
-Joe
Posted by Duff Tweed Carvings at 8:53 PM No comments: