What Do The Pink Pony and Duff Tweed Have In Common?


Here's the pitch:
What does the Pink Pony restaurant in Scottsdale, AZ have in common with Duff Tweed?


Swing, hit and it's a home run!  This truly is a home run.
So often we attribute names and hunches to the pieces Duff has carved unless they are noted on the back of his carvings. 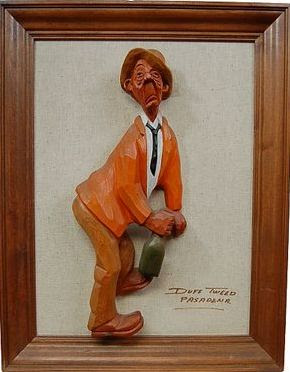 Now, as Duffy collectors know, we refer to the carving as "Double Jigger Jack Grant", however the Pink Pony auction in 2010 identified this carving as Charlie Briley.  Charlie is the common thread between the Pink Pony and Duff Tweed.  It's possible Charlie and his wife Gwen owned this carving along with a set of the Slaughterhouse Four that both sold in auction, but this presents a wonderful opportunity to share some history about a very neat baseball steakhouse in Scottsdale, Arizona and the owners; Charlie and Gwen Briley.

The Pink Pony: Yesterday and Today 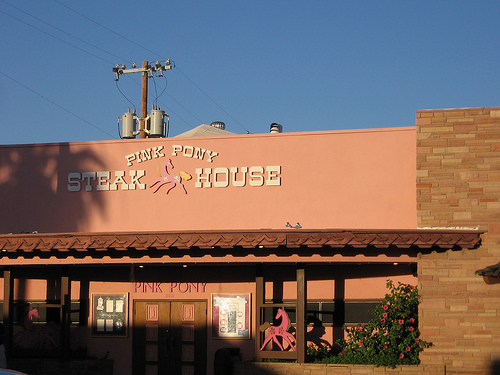 The Pink Pony Steakhouse in Old Town Scottsdale is still welcoming spring training fans and hungry people world wide into what Sports Illustrated called, "the most famous baseball bar in the civilized world". " When Charlie bought it back in 50', Dizzy Dean was a good friend", says Gwen Briley, Charlie's wife of 30 odd years, and the proprietress of the Pony since Charlie's passing in 2002. " Pretty soon, all of Dizzy's baseball buddies were hangin' out. Ty Cobb, Ted Williams, Johnny Pesky, Joe DiMaggio,Roger Hornsby, Willie Mays. You name em' & they were here." Billy Martin promised Charlie never to fight in the Pony, or at least start one.They still tell the story of the night Five Hall of Famers, Mantle, Lemmon, Mathews, Boudreau, and Banks were all in having dinner. Players were traded; league commissioners would gather, Gene Autry had his own booth, called the Millionaires Booth. It still remains the most requested spot in the house. When you enter the Pink Pony, you literally walk into history. Home plate from the original Scottsdale Stadium hangs on the wall. Charlie, and a few friends, put up the money, and the land to build it, then donated it to the City. He bought the first Ambulance for Scottsdale. He was quite the character. And that Character lives on. Little has changed. Little has to. The Pink Pony was named a Historical Landmark in 2004. The other reason to come to the Pink Pony Steakhouse is that it features a large menu including Prime Rib, Chicken, Fish, Pasta, Chops, Lobster - you name it. Prices range from $12. to $60. Great cocktails and a Fine Wine list. Ask the bartender about the famous bat collection behind the bar.

Gwen spent half of her life in the steakhouse. Her husband, Charlie, started it 60 years ago and nurtured the Pony into what New Yorker writer Roger Angell called "the best baseball restaurant in the land."

A lot of the old-school baseball guys who used to visit, from Dizzy Dean to Mickey Mantle and Billy Martin, are long gone. Charlie died in 2002. 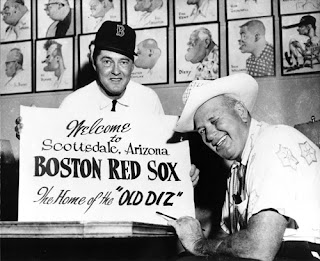 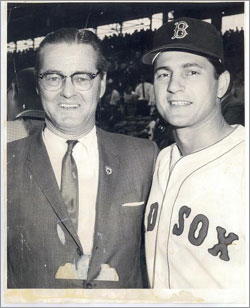 Charlie Briley with Carl Yastrzemski at in the early 1960s.
Gwen, 76, carried on the tradition with her son, bartender "Downtown" Kenny Brown, and her husband of three years, entertainer Steve York. But the world, and baseball, have changed.

Baseball is big business. Places like the Pony seem like relics in an age of $100 million spring-training complexes.
"The players don't come in anymore," Gwen said. "They go to the yuppie places."
Battered by the recession and an especially slow summer, she closed the Pony a week ago and put the building up for sale.
"At our grand finale, the whole place was crying, crying and drinking," Gwen said.
Scores of big-name Valley restaurants have taken it on the chin in the deep economic slump. But the Pony's demise stands out because of its longevity and its place in the history of Cactus League baseball.
Charlie Briley and the Pink Pony, which was 's oldest restaurant, provided the watering hole for fans, players, coaches, team executives and scouts. It was a place where trade proposals were sketched out on cocktail napkins and baseball talk went on until last call.
Briley's baseball connections started in the 1940s with Del Webb, a New York Yankees owner, who went on to build .
"Dizzy Dean used to go quail hunting with Charlie all the time," Gwen said. "Dizzy got all the baseball guys to come into the Pony."
Claudia Ogden, with some investment money from Webb, opened the Pink Pony in 1949, according to a Scottsdale Historic Register report on the restaurant. consulted with artist Lew Davis, who created the restaurant's name and created the pink logos.
Charlie was the Pony's first bartender. He bought it from in 1950.

In 1955, Charlie and other business leaders came up with $56,000 to build a wooden baseball stadium a mile from the restaurant for the Baltimore Orioles and a succession of other teams.
"He was absolutely one of the select few people responsible for spring training in and what it's grown into," said Don Carson, owner of Don & Charlie's, another spring-training hangout.  "I'm saddened that it closed," he said of the Pony.
Mickey Morabito, the Oakland Athletics traveling secretary, called it the end of an era: "Places like that aren't opening up anymore."  On his first trip in 1980 to join the A's, Morabito was taken straight from the airport to the Pink Pony.  "Billy Martin was having dinner and holding court in a booth," Morabito said of the A's manager. "He liked to keep an eye on everything that was going on."

The Pony was a dark bar, an icy martini and good steak.

Framed jerseys, photos and cartoon caricatures of baseball greats fill the walls. There are 19 black booths, nine barstools and a copper moonshine still that Briley got from a judge in his native state of .
On the back bar is a collection of Louisville Slugger bats signed by players on every World Series team from 1972 to 1997.
Some of the cartoons, drawn by Disney artist Don Barkley, have been given either to the people who posed for them or to their families, Gwen said.
The rest of the Pony's baseball collection, including home plate from the original Scottsdale Stadium, will be appraised and sold.
The 8,242-square-foot restaurant has been valued at $3.25 million. Gwen said she has talked to potential buyers and hopes someone will step up to the plate to take over the restaurant and possibly operate it as the Pink Pony.
In the meantime, the Pony's 35 employees are out of work. That includes longtime chefs Silvio and Alberto Flores, who are brothers, and Jesus Perez, a busboy for the past 16 years.
Gwen said she is sad to give it all up, even though it's been a struggle in recent years.


"Charlie told me he was going to make me a lady of leisure when he married me," she said. 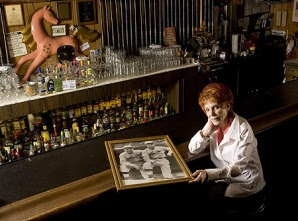 Whether the carving is actually called Double Jigger Jack Grant or Charlie Briley is of no consequence. This is a worthwhile story with some nice baseball and a little Disney history too!  This restaurant represents the time, the era and the feel of what life was like 50 years ago.  It also tells us Duff spent some time in Arizona as the Slaughterhouse Four band also originated out of Mesa, Arizona. 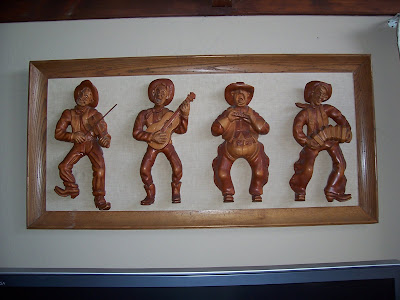 Just wanted to add one more picture of Charlie along with two of his Rotary counterparts.  Combined they represented 120 years of "service above self" for the Rotary Club.  Impressive! 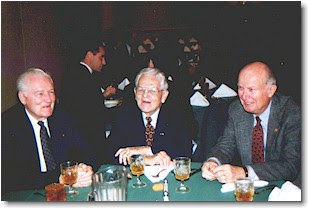 Ralston Pond - Dwight Thomas - Charlie Briley
Charlie was quite a guy and I would not be surprised one bit if Duff had decided to make a caricature carving of him.
We found all this to be quite interesting.  We hope you enjoyed it too!
Until next time, keep your eyes open for those hidden Duffy treasures.  They're there, you just have to be paying attention.
All the best!
-Joe
Posted by Duff Tweed Carvings at 7:03 PM No comments:


This week Duff Tweed's Slaughterhouse Four carvings sold in auction for $1,500 or $375 per carving!  Due to the fact that this particular set was previously owned by Roy Rogers, we believe the higher sale price was in large part attributed to his ownership.  Keep in mind there are additional fees associated with purchasing through an auction house, so the final cost to the new owner is considerably greater than $1,500 in total, not including shipping


Here's what the auction house had to say on this set of four Duff Tweed carvings: 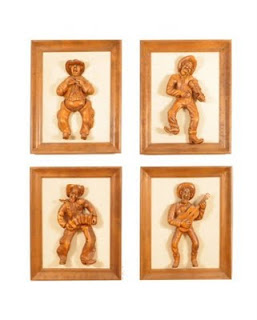 http://www.liveauctioneers.com/item/8796271#    You will have to sign up at Live Auctioneers.com, but it’s free!  Not sure how long they will keep the auction results with pictures posted, but we did capture one picture above of the set Roy Rogers previously owned.
It is very exciting for us and I am sure for all Duff Tweed carvings collectors to see increasing values on these wonderful treasures.  The fact that the set of four was personally dedicated to Roy Rogers by Duff Tweed only adds to its intrinsic and monetary value.
We and the collectors we know, collect Tweed's carvings because we love Duff's work and not for some future monetary payoff, although the fact that they have been selling for more only confirms the quality of his artistry.
If I were reading this entry, I would be asking myself, did Duff Tweed Carvings bid on the set?  Our answer is, No.  We already own two full sets of the Slaughterhouse Four.  A fellow collector previously mentioned in this blog (Rust Trap Ranch) placed a strong bid for the set and we did not wish to compete with that friend.  It was Rust Trap who originally alerted us to this auction.  We felt he should be given every opportunity to add them to his collection.
We would like to congratulate the winner/new owner of the Slaughterhouse Four carvings and welcome you to write to us and share.  That's what we do here, so please accept our humble invitation.
In closing, it has come to our attention that some of the new readers of the Duff Tweed blog didn't realize they could go back and read all the old posts.  Just click a year and all the previous posts display by month written.  Please do so in your free time as we have shared history, pictures, past sales prices on Duff's carvings and more.
It's warming up out there, so hope you're all getting out and enjoying Spring 2011!
All the best!
-Joe
Posted by Duff Tweed Carvings at 6:12 PM No comments: