Duff Tweed's Slaughterhouse Four are back! Plus another "The Cheater" and introducing "The High Roller"

I finally got around to photographing a second set of the Slaughterhouse Four which was recently added to the collection.  These interestingly enough come in a three and one combination.  That is, three of the carvings sit on one frame and the fourth (fiddler w/original bow) sits on his own frame.  They are darker in color than the four I already have in wormwood frames and all four including frames appear to be carved in pine wood.
These made the trip across the United States compliments of Noah in Brooklyn, NY.  My father was kind enough to drive into the city, pick them up and ship them to me as well.  Big shout out to DAD:

"Thanks Poppy, couldn't have done it without you!".
As I have continued to collect and meet other Duff Tweed collectors, it's obvious Duff carved most of his adult life.  Many of his carvings come with plaques stating they are limited editions of 100 carvings.  However, I strongly suspect that Duff never actualy completed 100 of each carving.  This happens in many aspects of art, for example where a sculptor will state they have made #1 of 20, but in the end only 6 or so exist.  The reason I believe this to be true is the fact that most of the limited editions I see are numbers 1 through 15 of 100.  I haven't found any higher numbers of the editions, but will be looking more carefully in the future.  If you're reading this and know of higher numbered editions, please write to me and I will thankfully include your information in this blog.

OK, now for some more fun.  I have seven new Duff Tweed carvings on their way here.  Hopefully they'll be safe in the mail and I can share them with you soon.  Four of them have never been seen in this blog and one previously shown here will now be added to this collection.

Additionally, I received two photos of carvings from Kristi in Texas which I offered to purchase, but suspect the family has decided to keep them.


"The Cheater" (golfer) which is already posted to this blog is pictured again below. 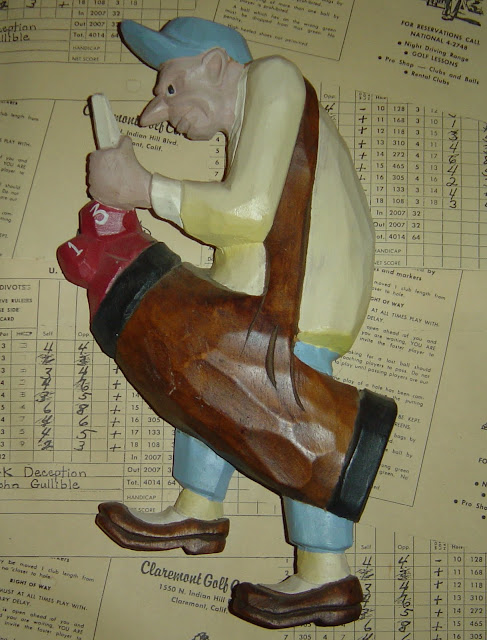 The other is of a carving called "The High Roller" which is of a naked man in a barrel.  Guess he lost it all!  You can see it in his face! 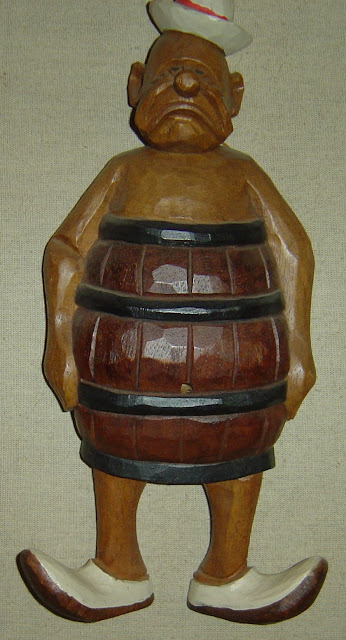 I do not own The High Roller, so I was very excited to get this picture of it to include in the blog.  Hopefully the family will allow me to add it to the collection.
Well, I do declare I have said a mouthful here today.  So look forward to coming back and sharing some of those new Duffalicious carvings with you as they come in.
All the best!
-Joe