As promised, we're back and truly excited to share the newest additions to the Duff Tweed Carvings collection.


Before you see the latest and greatest Duff Tweed carvings added to the collection, we thought we'd share the little we do know about these carvings.


They were purchased from John in N.W. Pennsylvania.  John drove a hard deal, but we just had to have these and are so grateful for his willingness to allow us to add them to the collection.  Apparently, John picked up the set of three carvings through an auction house in 1991.  If I understood him correctly, a friend of John's went to the home a family in the midst of divorce in Phoenix, Arizona in 1991.  The original owner of the carvings allowed John's friend to go into the basement of their home and take what he wanted, surely for a small price.  In any event, his friend sold them through a local auction house and when John saw them his only thought was, "These are Disneyesque, they must have some association with Walt Disney."  John's suspicions were confirmed when he learned the artist was none other than Duff Tweed, the hero of our blog! Rah Rah Duff! Hehehe. 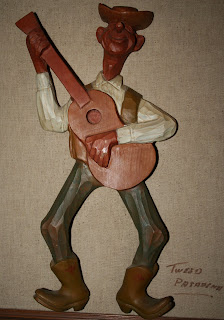 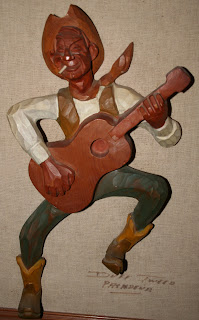 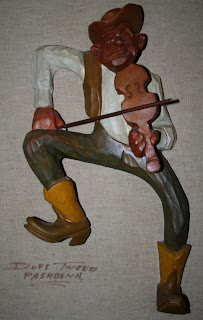 Don't you just love them?  We are personally into golf and as a result interested in golf carvings, but something about Duff's western carvings display action, motion, humor and just an artistry that is richly and solely Duff!  They're duffaliscious and we believe Duff put more effort into creating the western carvings even though he played and enjoyed golf.  With that said, asking us which is our favorite is like asking a four year old what they're favorite ice cream flavor is at Baskin Robbins. We love them all and each new carving discovered is like finding buried treasure.  Enough said. . . enjoy the remainder of the photos below. 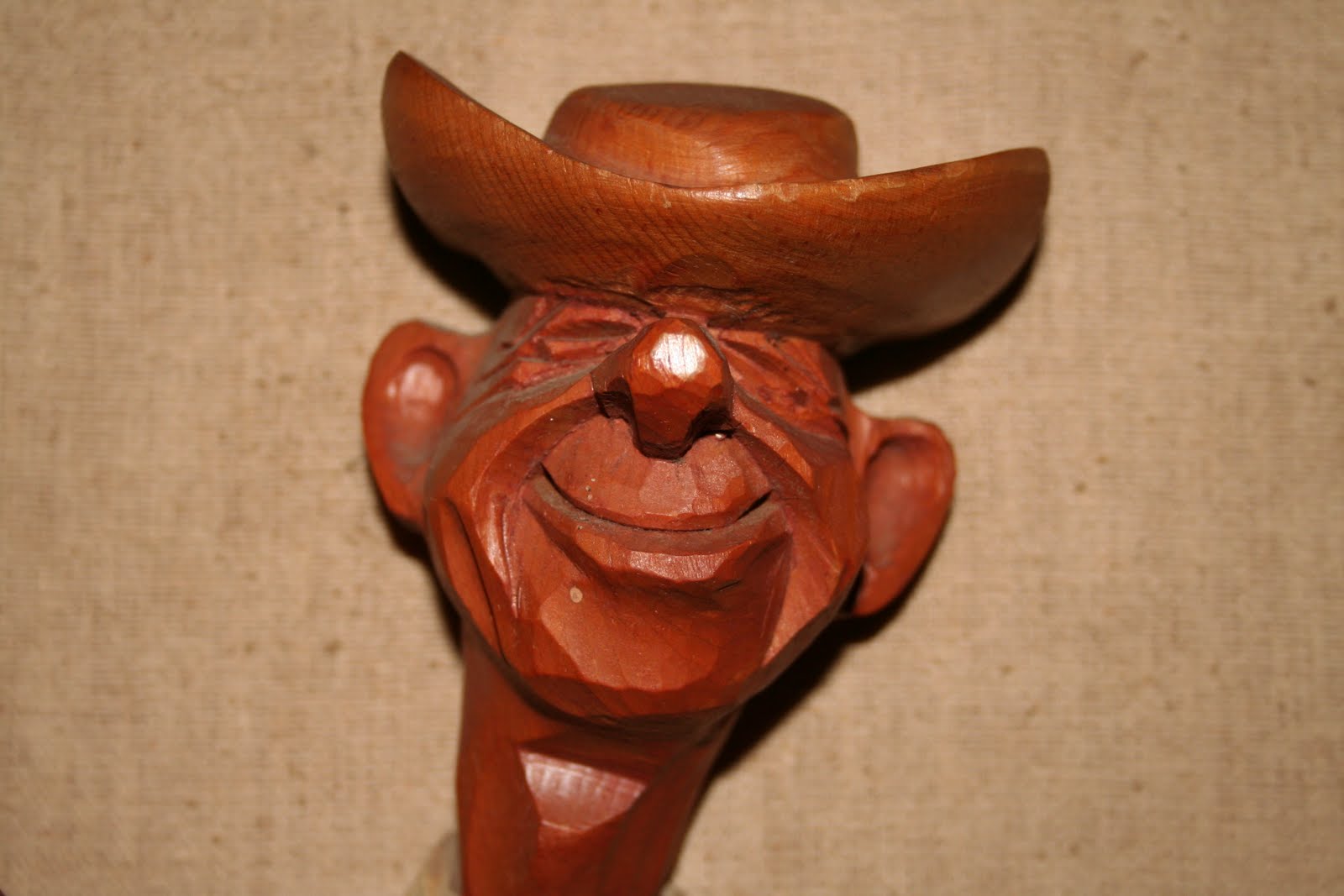 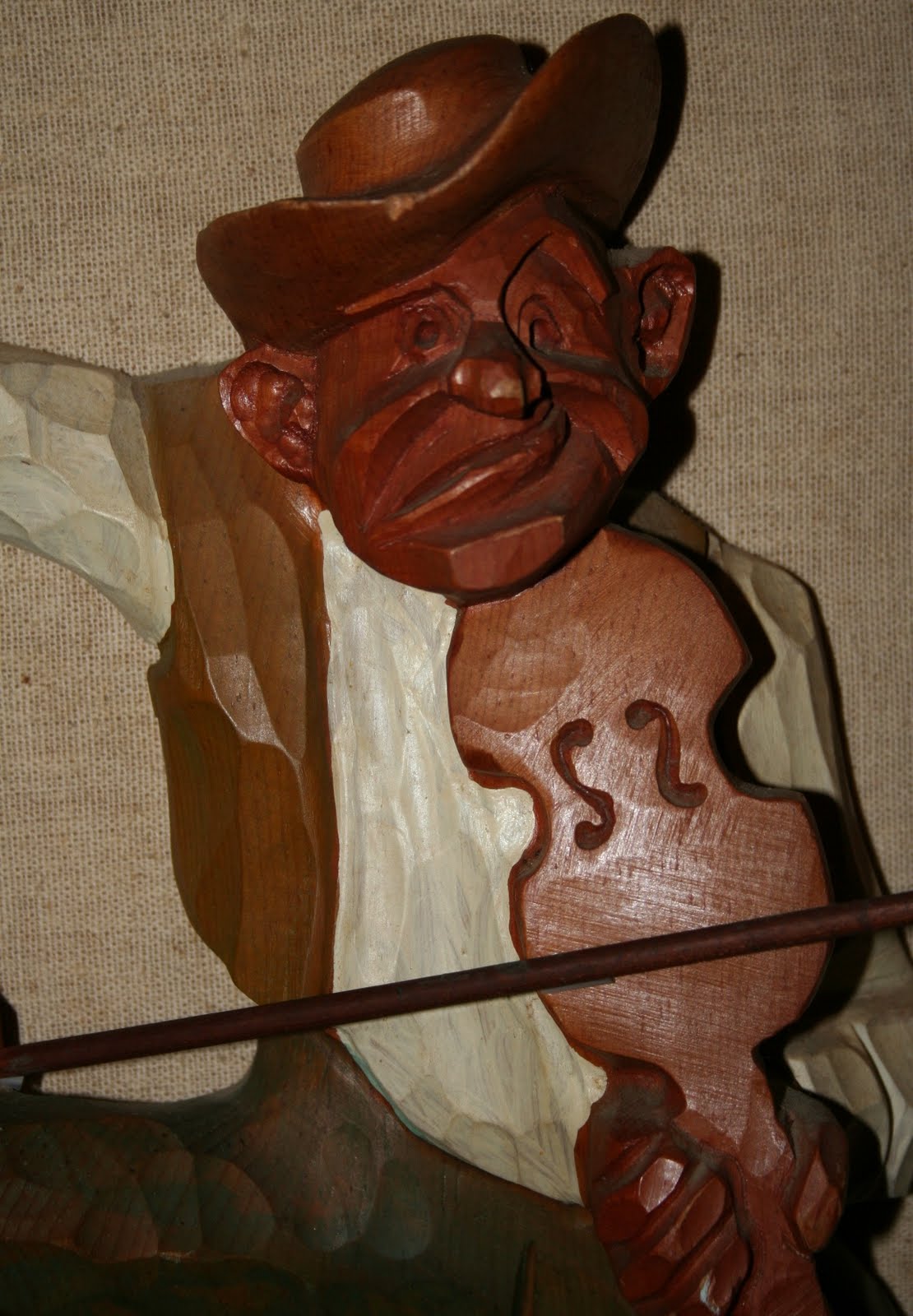 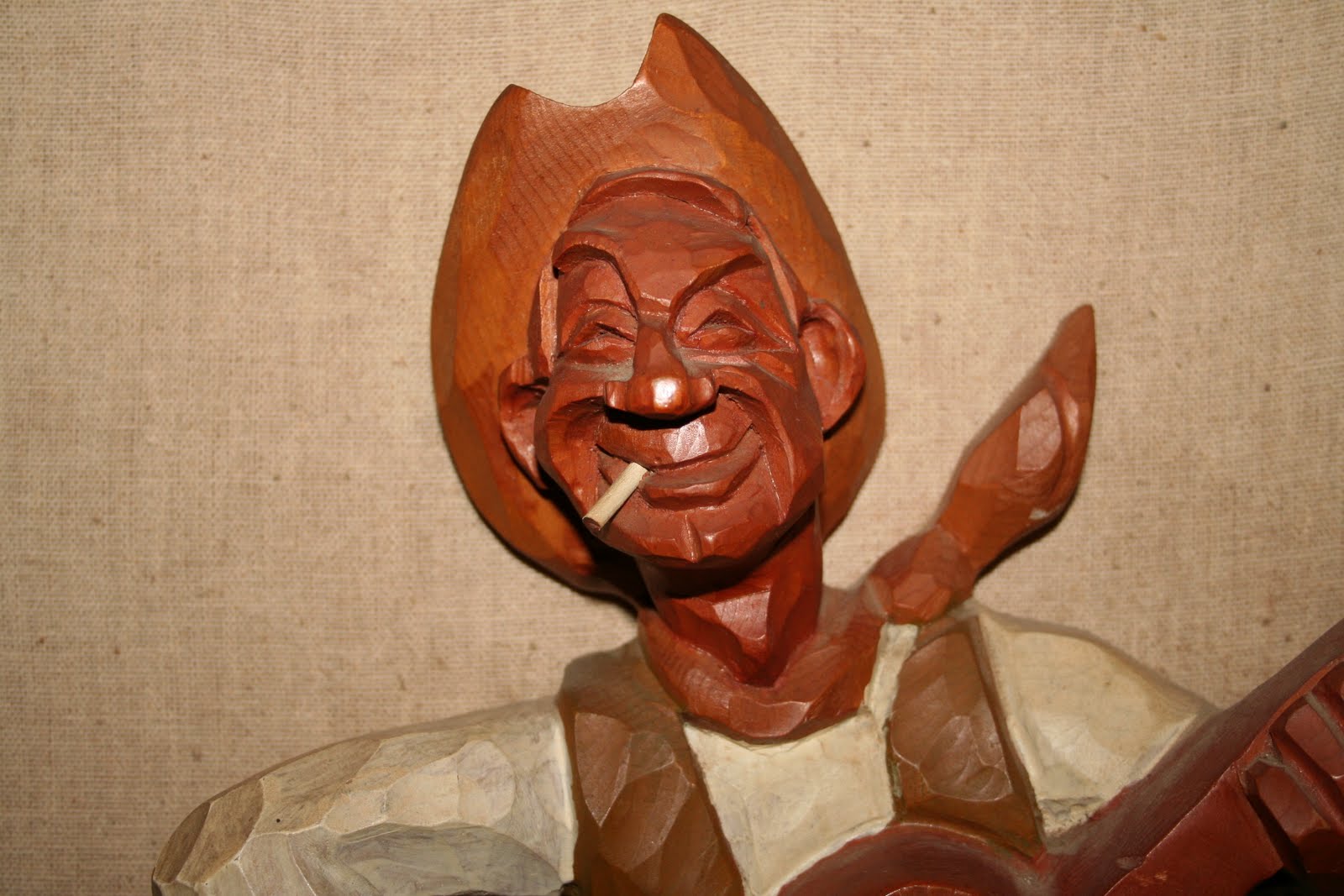 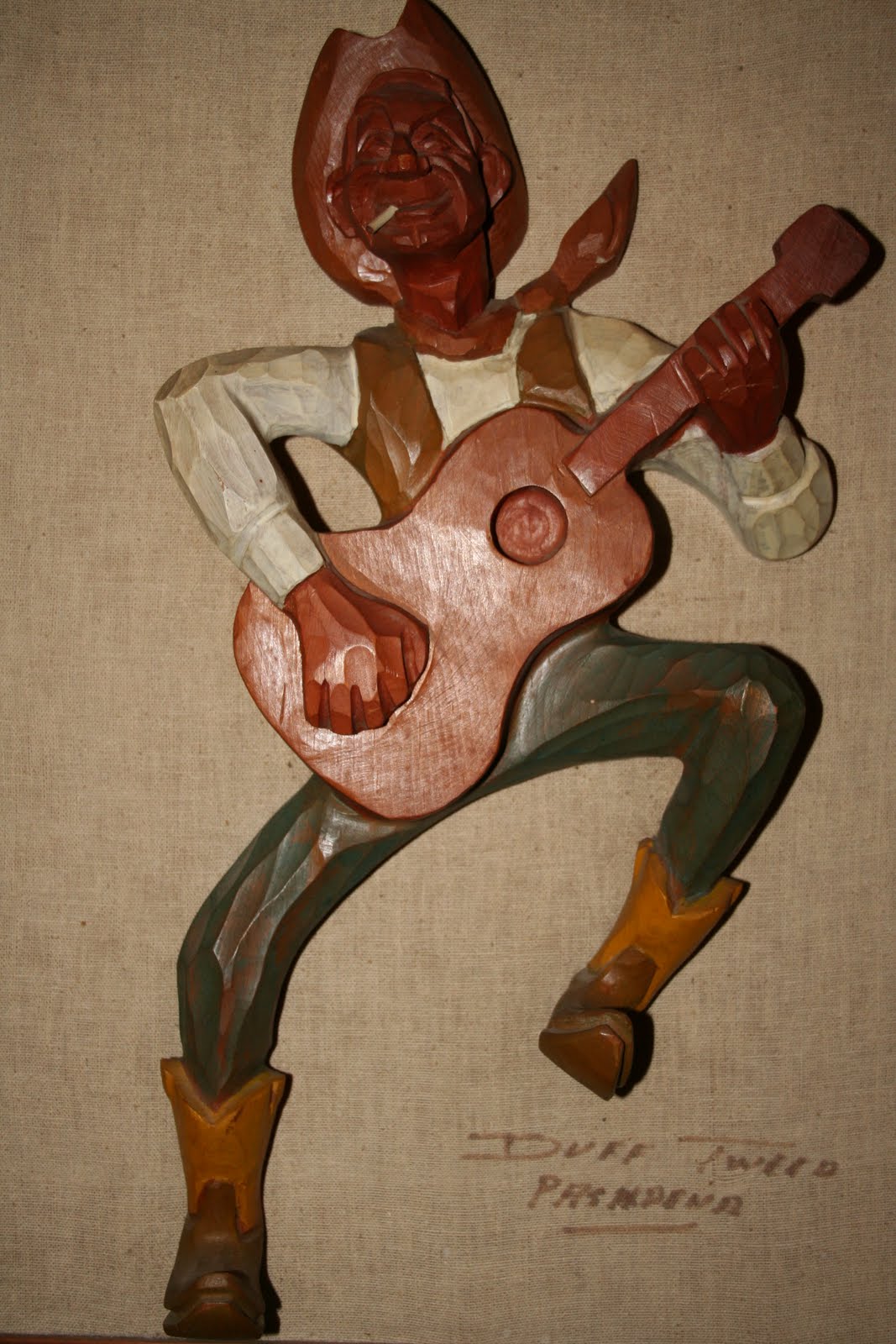 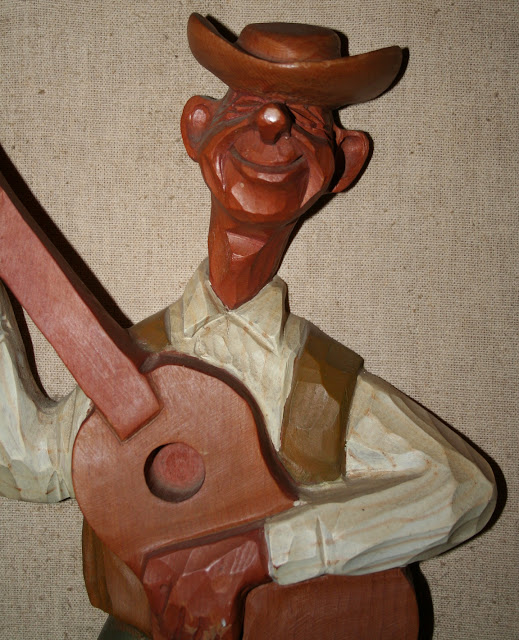 Hope you enjoyed these carvings as much as we have.  Sending out a big SHOUT OUT to John in PA!!! Thank you!
Until we meet again . . . 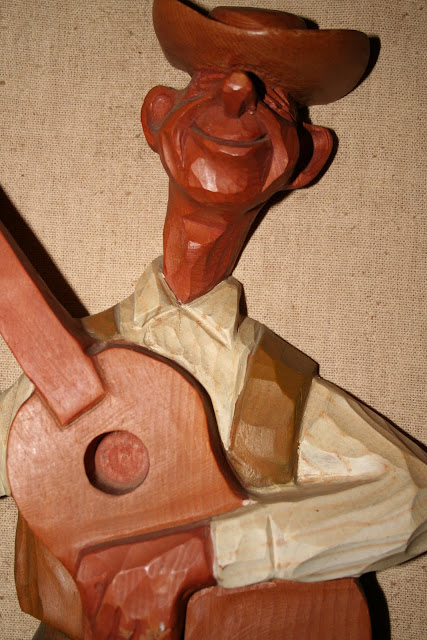 Posted by Duff Tweed Carvings at 10:07 PM No comments:

Glad you could come back and visit.  Sit back and enjoy for a few. . .
One of the toughest things we have experienced at Duff Tweed Carvings is getting real, factual information about the kind of person Duff really was.  While we greatly appreciate the art this man has created over the years he was here, we desire to know more about the man himself.
So, a few weeks ago we came across an old string on a Disney memorabilia site we had read several times before.  We had even responded to the string adding our own comments in relation to the value of a particular set of carvings Duff did back in 1959 titled The Slaughterhouse Four.  This particular set has all four carvings attached to one single frame.  After re-reading the string, we realized that the person posting it had actually spent significant time with Duff Tweed at his home in .  We contacted the gentleman and he was more than happy to share his memories of Duff.
Ron Urschel, now 62 years of age used to spend hours of time with Duff Tweed when he came to visit the family at their home in .  There is actually some history here as well.  Ron’s father Earl, who gained his aeronautical experience via the U.S. Airforce was a B-17 bomber pilot.  Mr. Urschel worked for Walt Disney as a pilot for the company.  Earl Urschel (Ron’s father) was actually covered by the famous Greg “Pappy” Boyington on many of his earlier missions.  If you don’t know the name Greg Boyington, then read Black Sheep Squadron and you’ll know what kind of guy Pappy was; fearless and loyal.  I suspect Ron’s father Earl was equally loyal and fearless.  Ron shared that his Dad absolutely loved flying.

To give you a feel for the time, was the place to be.  It was actually the place where movie and television stars moved to get away from it all. Ron and his family not only knew Duff Tweed intimately, but also were friends with Guy Williams (Zorro), Roy Rogers, Dale Evans, Gabby Hayes, George Reeves (original Superman) and Kim Graham (Playboy model) to name just a few.
When Ron was a youngster (about 5 years of age), Duff would come and visit the family where they then lived in .  His father Earl was now with Fairchild Aviation which was after he stopped working for Disney.  Ron recalls they had palm trees in their backyard and Duff would put Ron on his lap and try to teach him how to draw the trees.  Ron shared that the lessons never stuck, but the time with Duff definitely did.  Ron remembered how Duff used to bring what they called black paper to write on because the colors showed up more vividly. Duff did teach Ron how to draw Mickey Mouse, Donald Duck and several others.  He also continued to work with Ron on how to paint those palm trees.
We were curious . . . what kind of person was Duff ?  Was he serious, was he easy going?  Ron shared that Duff was a private person.  He walked around with no worries and was quite a happy-go-lucky person around people he liked and those with which he was comfortable.  He confirmed what another neighbor previously shared about Duff and his work; Duff actually had a lower level of self esteem when it came to his carvings.  He never made a big deal out of them.  They were more of a hobby that became a means to support his lifestyle.  Duff always wore blue jeans and a western shirt or t-shirt.  Interestingly, Duff played the guitar and apparently was quite good. This explains his many western musician based carvings.
Ron made it a point to let us know that it was his mother who actually appreciated Duff’s carvings.  She was very complimentary of his work, so in 1959 Duff made only two sets of the Slaughterhouse Four which existed on one frame.  Duff sold the first set to a friend in , for $500.  The second set was gifted to Ron’s mother Betty and father Earl.  Duff included a letter to Betty and Earl dated December 16, 1959 (see below) where he explains that the Slaughterhouse Four are actually ranchers that worked on his Dad’s ranch in , and not in as later pieces have indicated.  We can now only guess that the Slaughterhouse Four started as ranch hands for Duff Tweed’s father in and them moved to 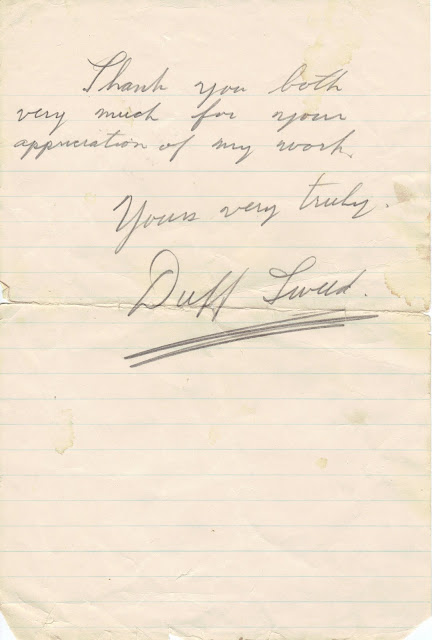 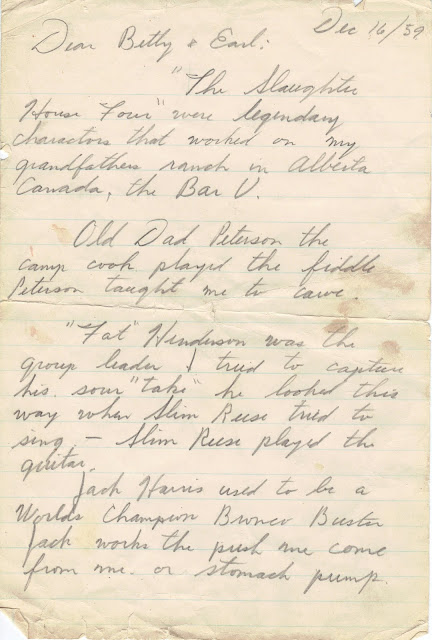 Eventually Ron’s folks parted ways and his mother Betty ended up with the Slaughterhouse Four.  Betty in turn gifted the set to Ron who will keep it FOREVER!  I would too.  Ron has had his Slaughterhouse Four set appraised and shared with us that the value is $20,000 or $5,000 per carving.  We discussed this in short, but we both believe that value will be accurate as other communities and collectors become aware of Duff’s work and his strong affiliation with Disney.


Before we say goodbye, we’re sending out a HUGE shout out and sincere thanks to Ron and wife Sue Urschel for sharing Ron's time, pictures and precious childhood memories of the time he spent with Duff Tweed.  As an aside, Ron smokes some of the best jerky and salmon around.  If you’re a smoked jerky or salmon fan, we’d be happy to put you in touch with him.  Ron included a picture of wife Sue Urschel, which we would also like to share with you in this post.

It truly has been our pleasure to share these Duffy tidbits with you.
Catch ya soon partner.
All the best!
-Joe
Posted by Duff Tweed Carvings at 3:07 PM No comments:

Hello.  Hope you had a wonderful relaxing summer.  It’s September 2011 and we’re back to the grind!
In our previous post we shared Ross Carr’s Duff Tweed collection of which we had acquired several pieces.  Well, after our original Duffy acquisitions we decided to add another three carvings to the Duff Tweed Carvings collection.  We had very specific reasons for adding each of the three carvings to the collection.
Duff ’s Laughing Golfers 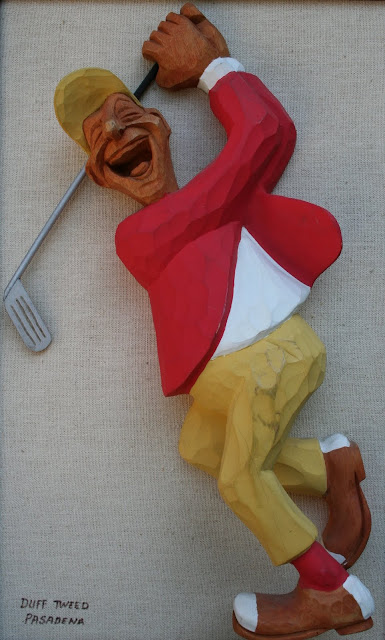 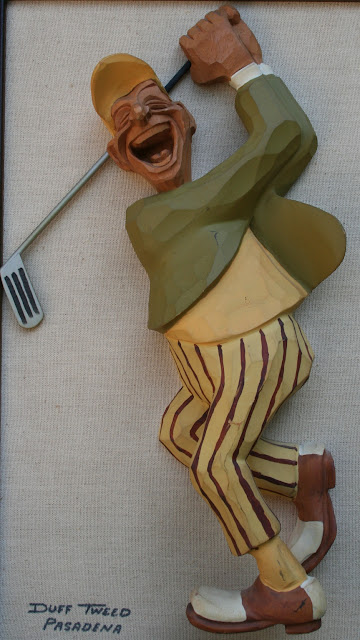 The moment we saw these two happy duffers, we knew they had to be added to the collection.  We have never seen these two particular carvings anywhere and they have increased the count to fifteen individually unique golfer carvings done by Duff Tweed.  Some time in the near future we will do a post and share all 15 different golfers so you can see them together.   However, for now we will continue to share our “never before seen” Duff Tweed carvings, which continue to pop up out of the “woodwork”.
We really appreciate how Duff painted these guys and the expression on their faces is just perfect.
We love the striped pants in the picture above. Just classic! 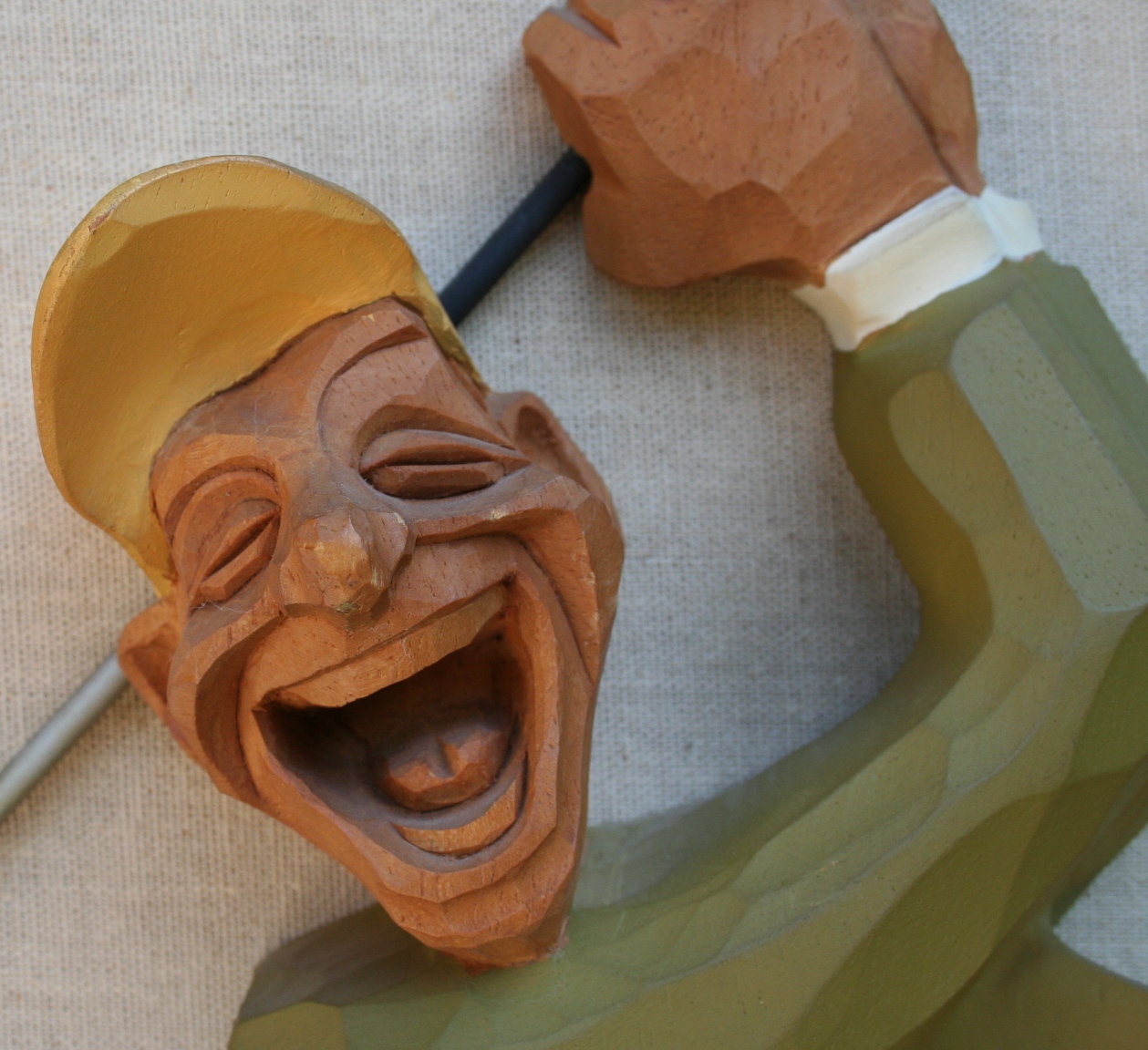 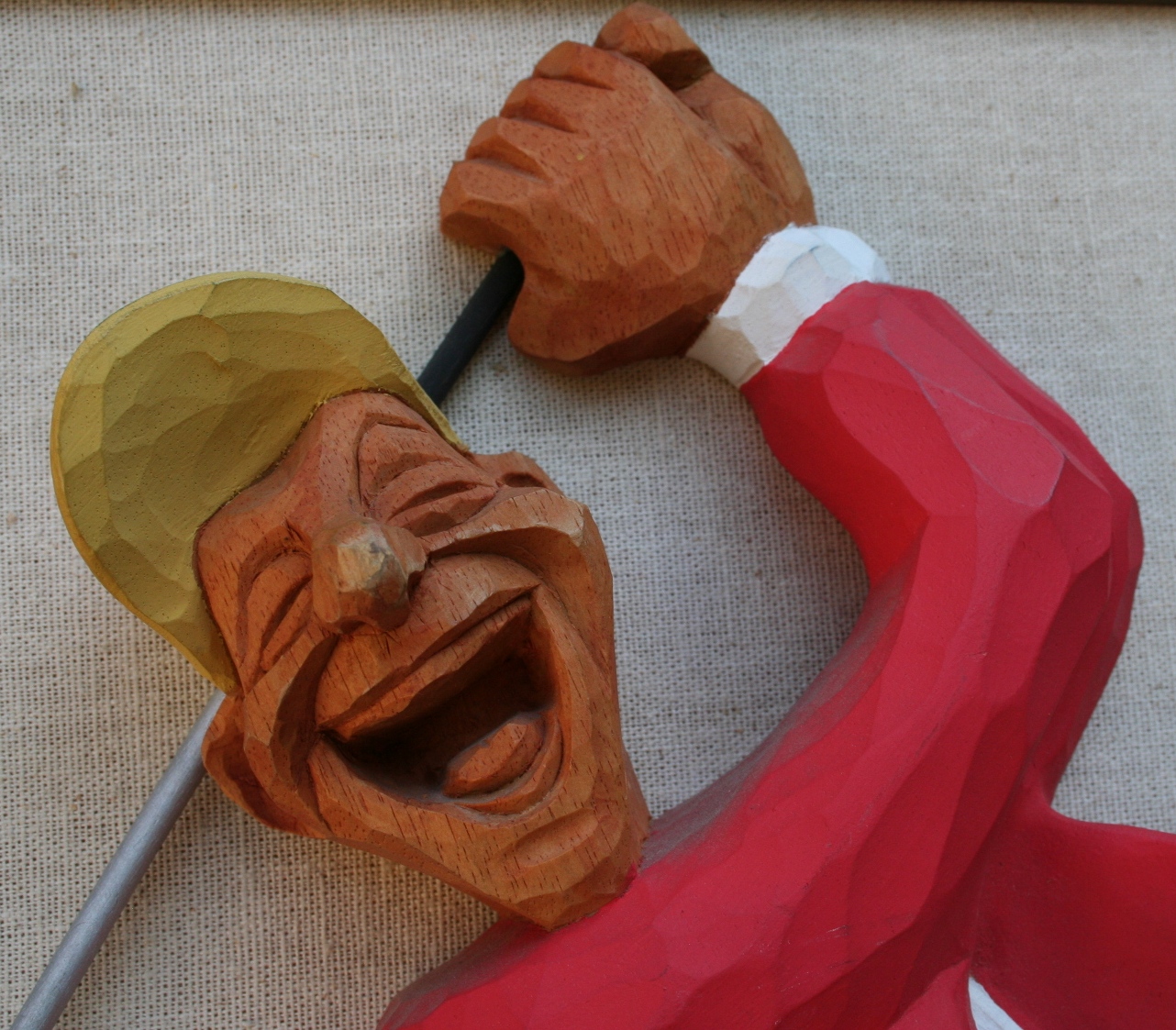 Now we have one more surprise for you.  The Duff Tweed carving below of the Sailor with Life Preserver is one we already have in the collection, but we added this one for several reasons. 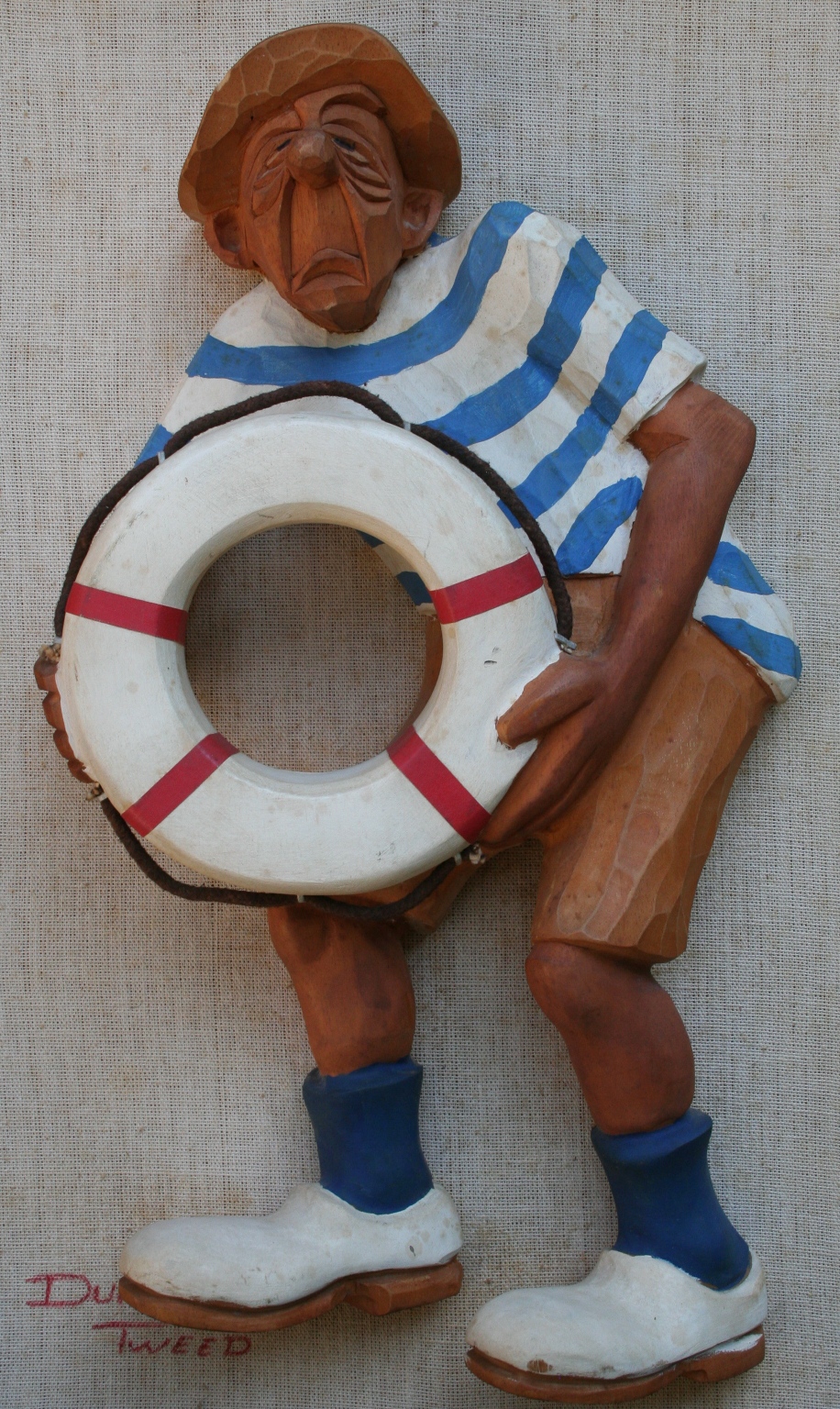 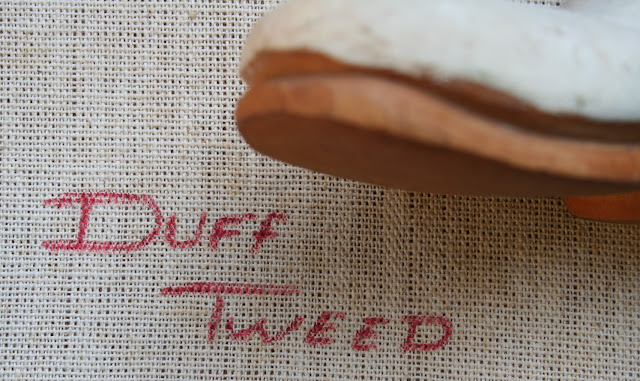 First, you’ll immediately notice that Duff signed the front of the piece in RED ink.  We have seen over one hundred of Duff’s carvings and not a single one was signed in red ink.  What really got us interested in the piece, was what had been added on the reverse side. 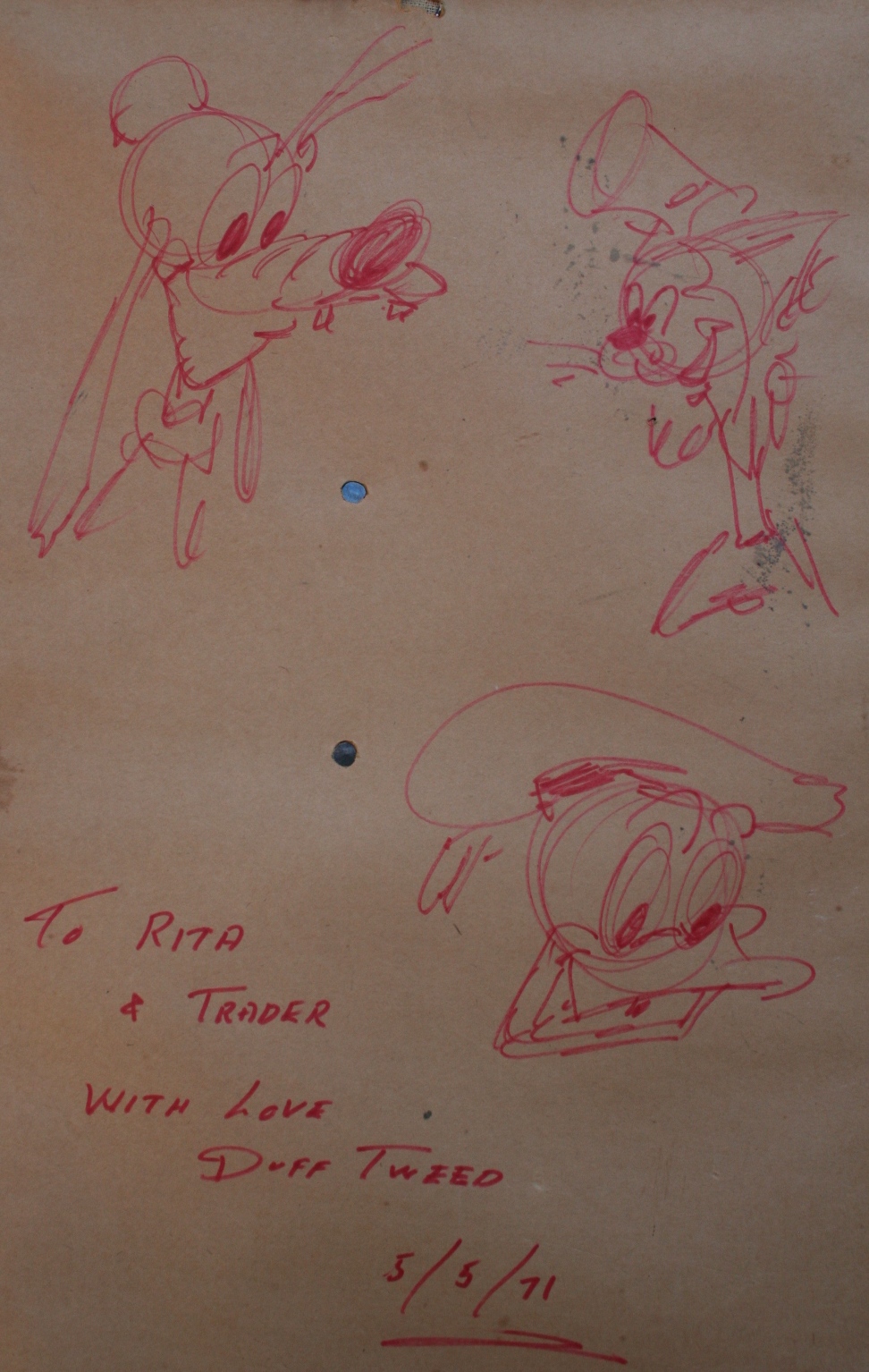 When Duff dedicated his work to his buyers, he typically drew one (or zero) Disney character illustration on the back of his carvings. Take a look below and check out all three close-up illustrations completed in red ink of some of the most recognizable Disney characters of that era.  As it is a rare experience to come across any of Duff’s Disney illustrations, we truly feel honored to have added this wonderful piece to the collection. 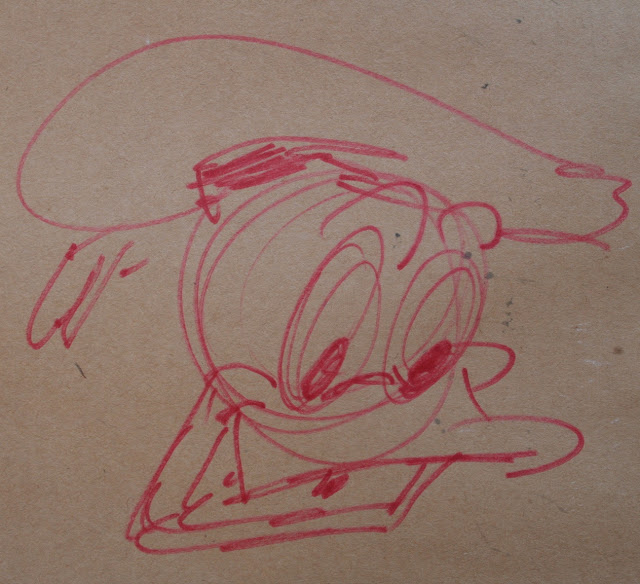 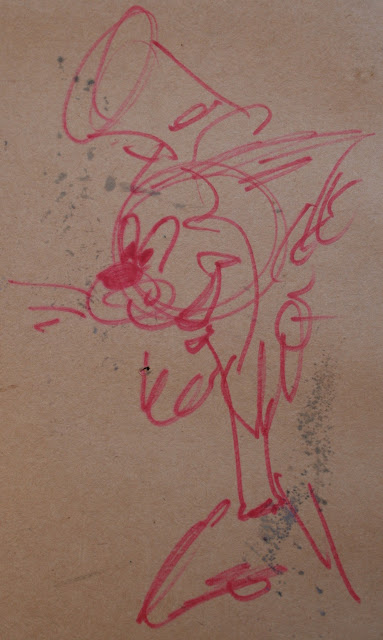 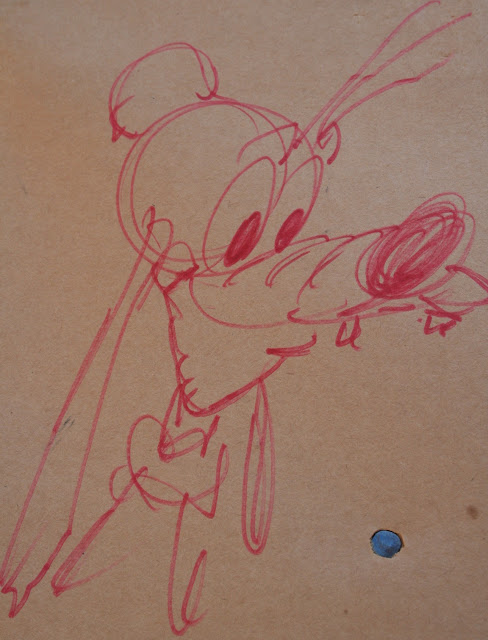 Please come back soon and visit as we have two more posts coming soon.  The first is an interview with Ron Urschel of Nevada who used to have Duff Tweed come visit him when he was a young child.  You won't want to miss it.  The next post will be of three never before seen Duff Tweed carvings which you also won't want to miss.  Until then, wishing you all a wonderful Fall 2011!
All the best!
-Joe
Posted by Duff Tweed Carvings at 1:24 PM No comments: