Happy New Year! May you have health, wealth and happiness this year and always!

2011 is here and so are two hobos new to this collection.


For starters, we always give credit where it's due.  The expression, "Two, I say two!" is my mother-in-laws saying.  When I first met her she used the expression all the time.   Years ago we took my wife's mother shopping for a gift.  She chose a nice looking purse/handbag.  While getting ready to pay I notice there were two purses at the register.  So I asked my wife about them and my mother-in-law sings out "Two, I say twoooooo.".  We all laughed out loud! I've learned many things in life and one of them is, "never argue with your wife's side of the family" (that's her privilege).  Needless to say, the saying became a family favorite.


So now we have two, I say two hobos carved by Duff Tweed.  Each has sustained damage, but since both were new additions to the Duff Tweed Carvings collection, we happily purchased them.  These came to us from Ken B. in Oklahoma.  He actually purchased three Duff Tweed carved hobos that came stacked in a dirty wood box at an estate sale for $5.00 total. Those amazing deals are out there and they appear to be all over the United States and Canada. We purchased two of the three hobos as we already owned the third one. That third hobo was also damaged and sold on Ebay for approximately $15.50 plus shipping and handling.  We paid ALOT more for the two we purchased, but there's a price to pay when building a collection.  This makes over thirty unique carvings that now exist in the collection.

Below is what we're calling the Hungry Hobo.  His right hand shows damage to his fingers.  The rest of the carving is in perfect shape.  His left hand is on his stomach and he is crying out.  He could also be swearing his promise to someone as he has his hand in the air.  At least that's what we see!  These appear to be earlier Duff Tweed carvings. 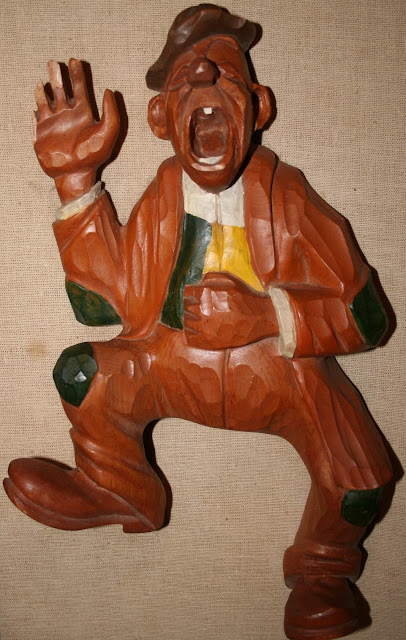 Nice tongue and tooth below! 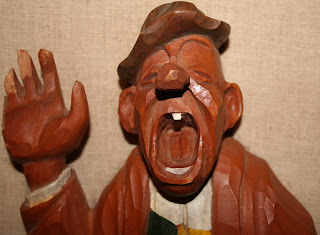 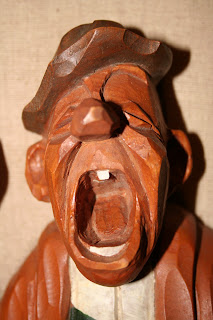 Next we have the "I Ain't Got No Money﻿ Hobo".   It looks like he was asked for money, he didn't have any to give and someone took a chisel to his face.  It's a real shame, but you can still get a great sense of how this pieced looked in it's original form.  We took one look at him and heard David Lee Roth singing,
"I-I-I-I-I-I-I ain't got nobody"... 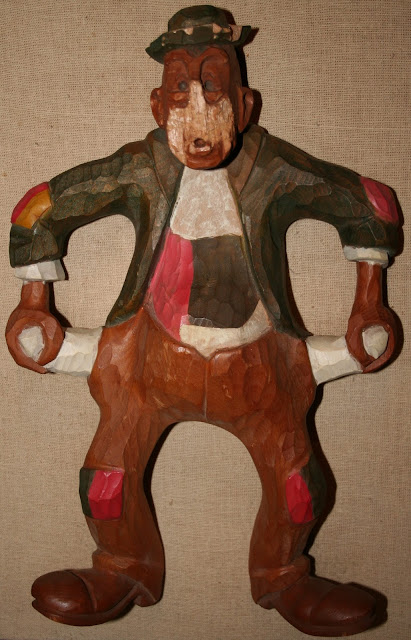 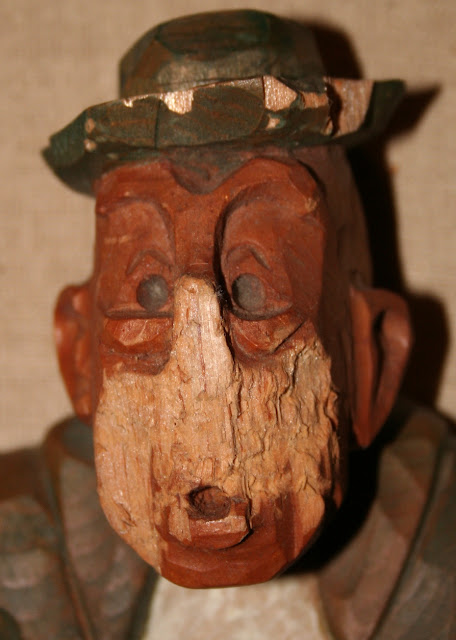 We feel extremely fortunate to have been able to have added these two Duff Tweed Hobo carvings to the collection.  A big sincere thank you goes out to Ken in OK!!!  Thank you for your contribution to the collection!
For those who are curious about the third damaged hobo which sold on Ebay in December 2010 for $15.50, here's a couple of pictures below: 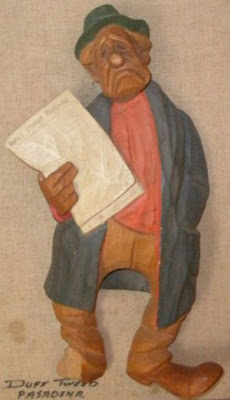 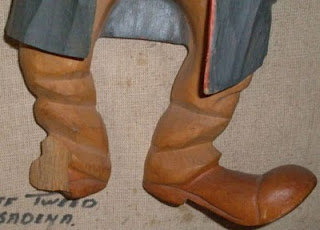 Really hope the buyer of this Duff Tweed enjoys him.  It was the only one of the three carvings signed by Duff and had his home address and phone number on the back.
We're looking forward to a wonderful year full of new collectors, stories and of course additional Duff Tweed carvings!
All the best!
-Joe
Posted by Duff Tweed Carvings at 8:26 PM 2 comments: