We’re baaaaack, and a lot quicker than expected.

We were contacted on May 6, 2012 by a wonderful couple, Margaret and Joe who reside on the west coast of the .  They first wrote to inquire about selling their collection of TEN, that’s right, ten Duff Tweed carvings.  We were thrilled to find another collector of Duff Tweed carvings who had actually put together a full collection of carvings, three of which we have never seen before.

From what we gathered from our conversation with Joe and Margaret, was that they had purchased all ten carvings directly from Duff in the late 1970’s.  Joe had a diesel engine shop where he built diesel engines for automobiles.

One day this man appears, sharing his association with Disney and walks in with ten unique carvings.  That man was Duff Tweed and he had all these carvings stored in his car and was making sales trips to find interested buyers.  This is how Duff sold most of his carvings and we have had this verified by many other Duff Tweed carving owners.

Joe took one look at the carvings and purchased all ten directly from Duff.  We asked Joe if he could share any particulars, but it was a long time ago and he recalled Duff walking in, displaying the carvings, selling them and then driving off on his merry way.

We had actually made a deal with Margaret and Joe to purchase all ten carvings, but quite understandably they decided to hold onto them for a while longer.  There were only three that were of particular interest to us, as we do not yet have them in our collection.  Below are all ten carvings from pictures sent by Margaret and Joe.  Some were smaller, so I attempted to crop them, make them larger and hopefully clearer.

The first picture to the left is a trio of Duff Tweed carvings.  The first one pictured is named “Our Fearless Leader”, one of the three carvings we do not have in the collection. Then we have the ever so familiar “Sue the Bastards” and “Wall Street Hobo”. 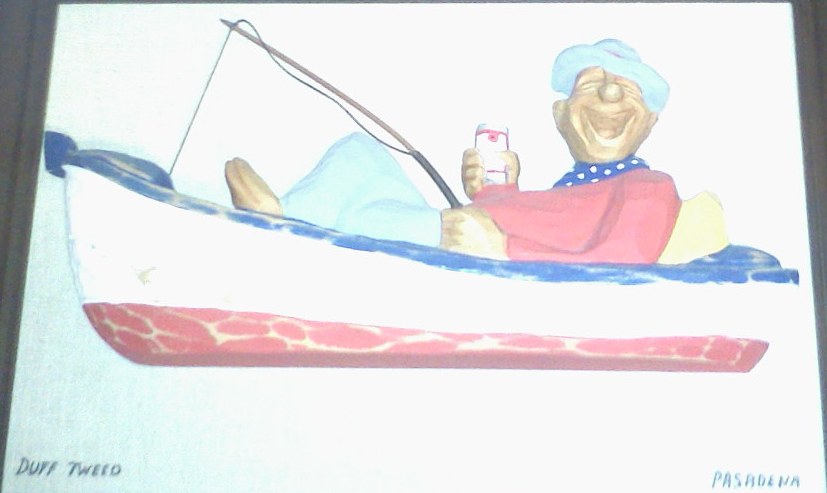 Next we have Duff Tweed’s fisherman. We only recently acquired our carving of the fisherman and absolutely love it.  Makes you want to go fishing, doesn’t it?  If not, then you can just get in the boat and drink. Hehe. 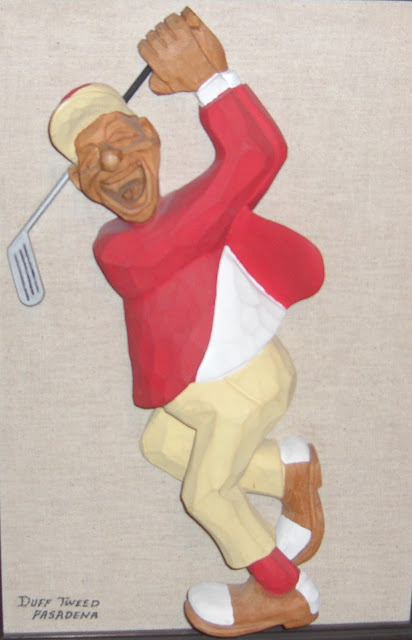 To the left is the Duff Tweed carving we named The Laughing Golfer.  We have two in our collection, but this is the first time we have seen the carving elsewhere.  As far as we can tell, Duff did more carvings of golfers and hobos than any other topic.  We are aware of over 14 different golfer carvings made by Mr. Tweed.

Speaking of Duff’s Hobos, here are two of them. The one on the lower left is Duff’s “The Low Bidder” which we own several of in different painted patches and colors.  The second carving to the lower right is a hobo resting on a post.  This second carving is not yet a part of the Duff Tweed collection, but we have a friend who was going to sell it to us.  Time will tell.  We’d love to add the one below to the collection. He's a happy guy! 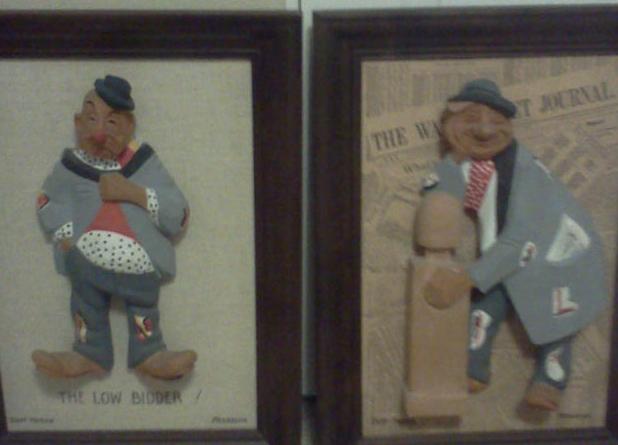 Below we have a set of three Poker Players by Duff Tweed.  We absolutely love this set of carvings and are aware of four in existence.  We have two sets of this carving in our collection, but the color of the paint does differ on some characters.  Joe and Margaret have a nice clean set of three.  We have always loved this carving and over payed for our first set.  Note the expression on each carvings face.  Did you catch the guy in the middle cheating by reaching under the table to get more cards?  His face tells the entire story. 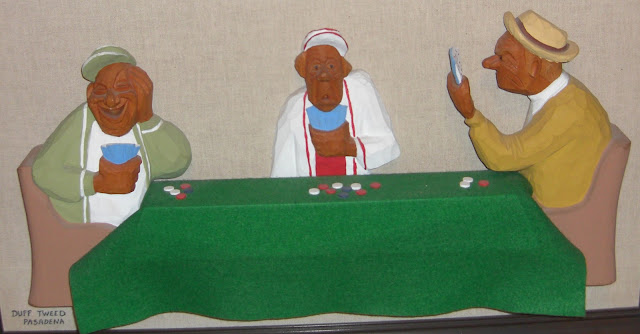 Last but not least, we have Duff Tweed’s tennis players.  The picture to the left below is of a carving we do not have.  The carving is of a tennis player poised to receive his next serve.  We have never seen this carving before and think he pairs wonderfully with the tennis player below and to the right.  The second tennis player which is also really neat, is a member of the collection twice. 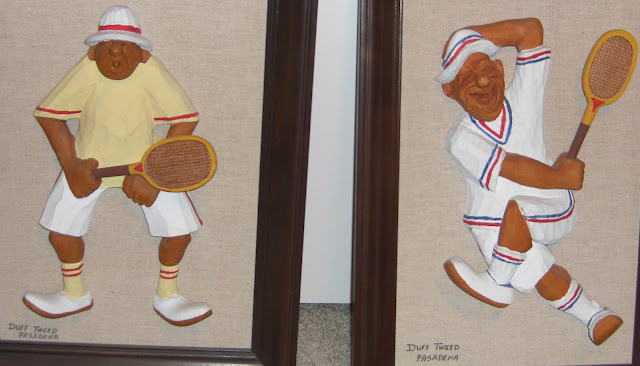 We’re sending out a HUGE thank you to Margaret and Joe for taking the time to share their wonderful collection with the world.  THANK YOU!!!

We believe they were surprised by the lower values presently attributed to Duff’s carvings.  We do look forward to picking up some of their pieces in the future, but knowing they own and are enjoying their wonderful collection is the best reward ever.

It is the collective group of Duff Tweed carvings owners that truly contribute to the future value of these priceless pieces of vintage art and culture.  What we appreciate most about our fellow collectors is that they have these carvings purely for their love and appreciation of Mr. Tweeds work, and not for the dollar value they will have in the future.  Duff collectors, you are a special breed, apart from the rest!

All the best!
-Joe
Posted by Duff Tweed Carvings at 12:28 PM 2 comments: Links to this post

It's been way too long since we last posted to this blog. Are you missing our Duffy news? *laugh*  Been working on the golf game which has been occupying most of our time.


A month ago we were contacted by an owner of a Duff Tweed carving affectionately named "The Happy Golfer".  There are actually two versions of the golfer which can be seen here in previous posts.  Go check them out!


Jay from Ottawa Ontario, Canada was kind enough to share his "Happy Golfer" with us.  Here's his treasure below: 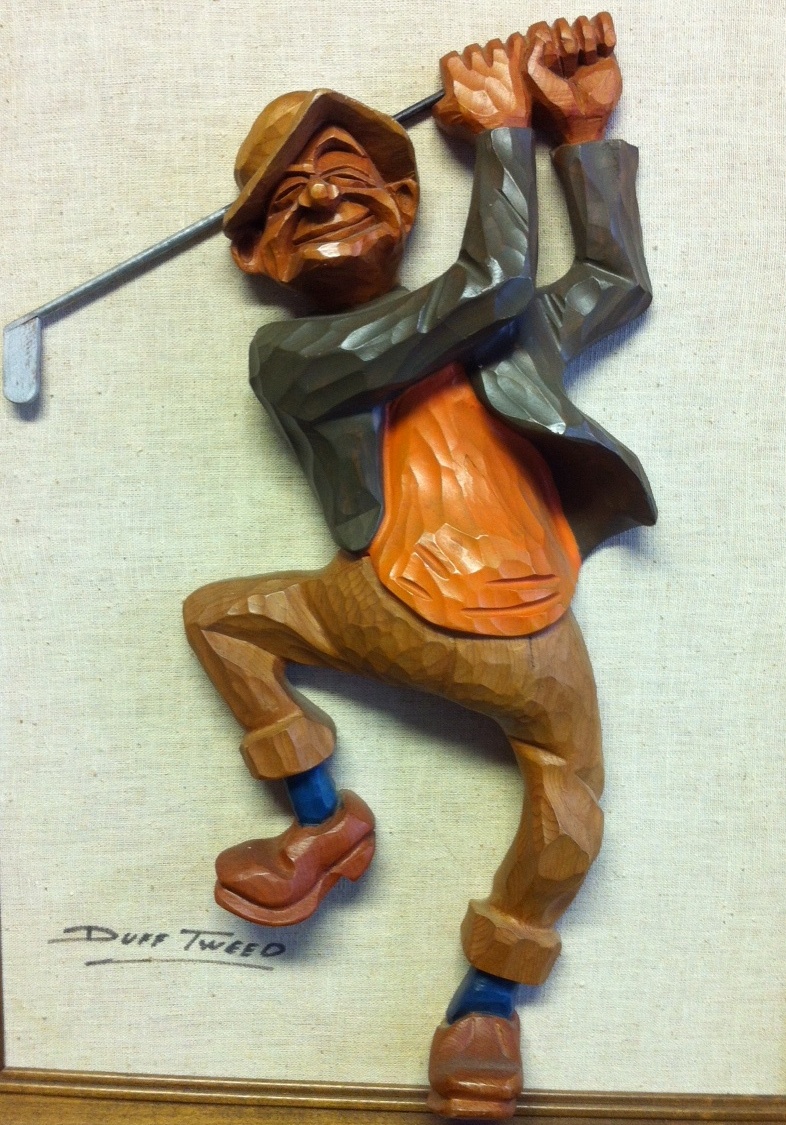 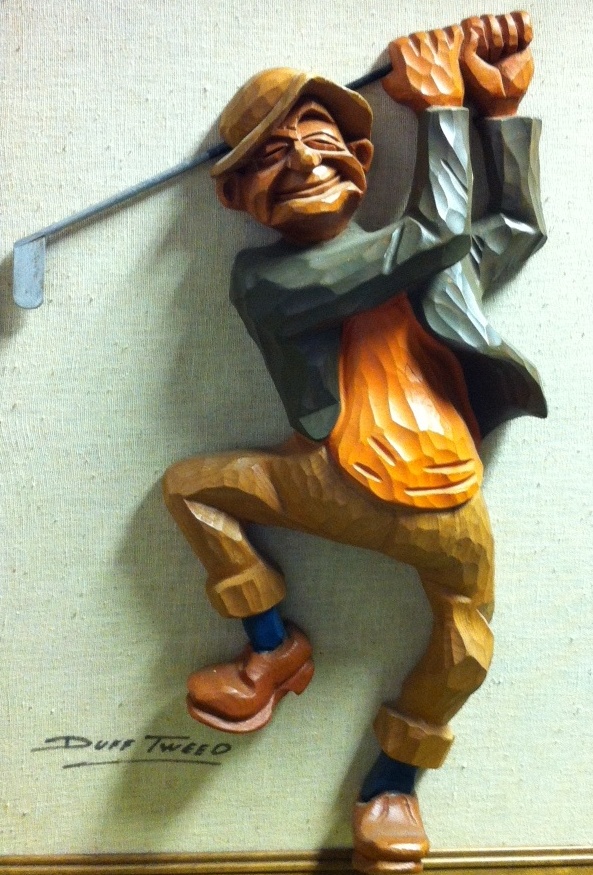 Jay was given this Duff Tweed carving by his mother-in-law, Holley.  Holley and her husband Ed were close friends with Duff and his wife and "wintered" together in Florida.  We continue to learn more about Duff and his life from every little tidbit of information we gather from various collectors around the world.  Thanks Jay!

Below is a picture of the back of the frame where Duff dedicated this piece to Holley and Ed.  You should note, he signed it "LOVE", which tells us they were definitely close.  We have never seen another Duffy dedication where he used the word Love.  A special piece indeed. 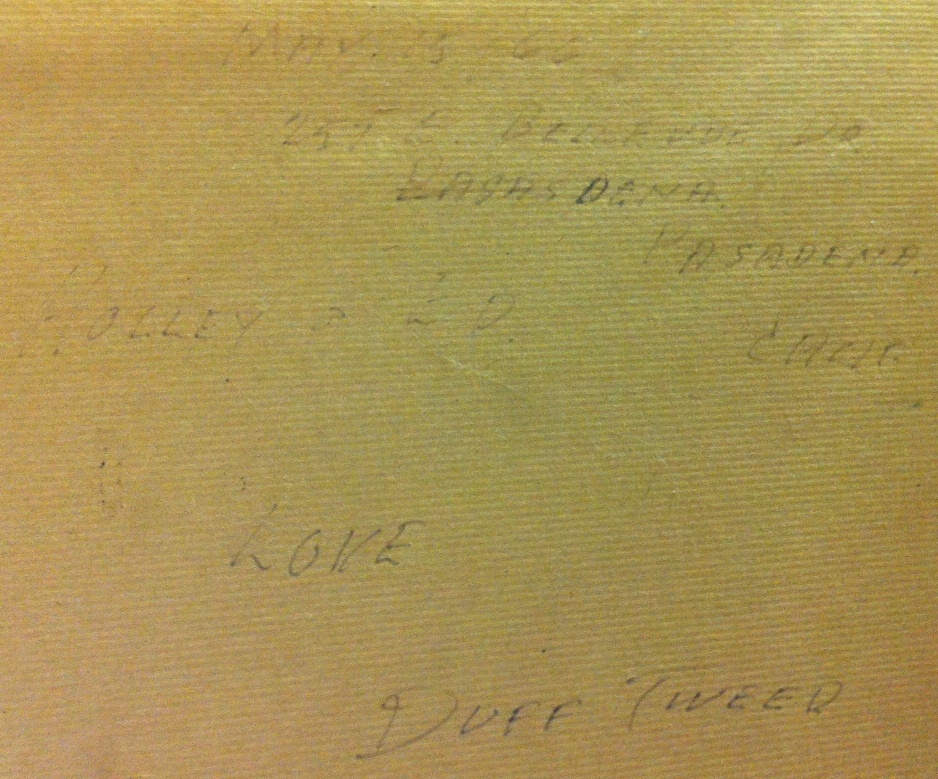 This isn't the clearest writing by Duff, as the ink has faded over time.  You can still make out that he dedicated the piece to Holley and Ed on May 15, 1966, included his home address in Pasadena, CA and "Love Duff Tweed" is rather clear at the bottom.

Want to send out a big shout out and thank you to Jay W. in Canada for sharing his cool Happy Golfer carving which looks to be in excellent condition.  That carving is over 46 years old!

We'll be back soon to share a collection of 10 Duff Tweed carvings, three of which have not been previously seen or shown in this blog.

All the best!
-Joe
Posted by Duff Tweed Carvings at 10:43 AM No comments: Links to this post