Is there a Doctor in the House? The Nurse Who Knew Duff Tweed

After having not written for six months this is now our third blog entry today.  Shortly after posting Jay's Disney illustrations in the first post of the day, we received another amazing Duffy pencil drawing.  I say there are no coincidences in life, so something is building here...excitement.

Tonight Lisa was kind enough to share her Duff Tweed illustration of her mother which is signed by none other than the guy who keeps giving, Duffield Tweed. Now, for all I know, Lisa's mother ran the hospital, but we liked The Nurse Who Knew Duff Tweed, as it has a warm feel to it.

Lisa shared the following along with the pencil drawing:

I found your blog when I started doing some research on a pencil drawing of my mother by the artist Duff Tweed. I am wondering if you could possibly verify the Duff Tweed carvings artist is the same person who drew my mother. The drawing (attached) is on the back of a patient form from the St. Joseph Hospital in Burbank, CA, sometime in the late 1940's or 1950's. The hospital is across the street from Disney Studio's and Walt Disney used to visit the children at the hospital. Just knowing the history adds to my treasure box of precious items that belonged to my parents. Thank you so much for taking time to look at this.

I then replied and Lisa replied once again allowing me to share this with you.

What a quick reply!  Thank you so much for clarifying that for me.  I don't plan to sell it, I just wanted to know who the artist was. My mom worked at St. Joseph Hospital for many years and met so many people from the Walt Disney Studio. I would be honored if you posted the story about my mom's drawing. Let me know when it's posted, I'm going to share it on FB, and maybe fit it into my blog.

Thank you Lisa, we all truly appreciate your sentiment and that you cared enough to share.

Now without further adieu, "Lisa's Mom" or "The Nurse Who Knew Duff Tweed" as illustrated by Duff Tweed from around 50 years ago:
So, for Lisa's questions, I verified this is an authentic Duff Tweed pencil drawing after having seen enough to recognize his signature and style.  This drawing does look different, but Duff drew with emotion, and depending on the subject matter and time in his life, each drawing shows a different level of focus and detail. It's his work.  He always paid the most attention to detail in the eyes; for his illustrations and carvings.

UPDATE: It appears Lisa is quite the blogger in her own right!  Check out her blog for the accurate story of her Mom's employment past including a photo of her. I think Duff captured her likeness quite well.  What do you think? Click here: http://itsallcalifornia.com/duff-tweed-disney-animator/

Making a tremendous Shout Out to Lisa for sharing a part of her life and one of her most precious prized possessions with all of us.  Thank you Lisa!!!

Be back soon...be back later?  WHO KNOWS, BUT WE'LL BE BACK!

All the best!
Joe
Posted by Duff Tweed Carvings at 10:45 PM No comments:

Ebay is Loaded with Wood Carvings by Duff Tweed


Hello again...said I'd be back soon, but this a record for me...LOL  Just feel like I haven't shared enough with the loyal Duffy fans out there so I'm serving up another post immediately.  Enjoy!

I have noticed for quite some time that the number of Duff Tweed carvings listed on Ebay has greatly increased.  One used to visit and see three, maybe four of his pieces at most.  Today there are NINE listings for Duffy carvings and one is a set of three golfers on one single frame.  Since it's golf season (when is it not? *smile*), I decided to start with the three golfer carvings. Following them are four hobos, Double Jigger Jack Grant and a Boatman with a life preserver.  If you are interested in getting your Duffy collection started or simply want to add to your existing collection, this would be a great time to do so. Check out Ebay!


Now it's hobo time.  Duff often took a similar carving and in some cases gave it a name and in others simply wrote "Duff Tweed".  Two of these were titles The Low Bidder while the other two fall into the no title category:


Alrighty now, it's time for a little hooch and Jack's Old Mule would definitely be categorized as hooch! . Hehehe.  Here's yours and my old friend Double Jigger Jack Grant:
Last but not least, protector of those on the water is Duff Tweed's Man with a Life Preserver.  I am sure Duff gave him an actual name, but we have yet to find someone who knows what it is.
Well, I truly hope you enjoyed the Ebay review of Duff Tweed carvings available there.

Wishing you each a safe and happy remainder of your July 2017.  Hoping to be back in a few to share more Duffy tales.

Posted by Duff Tweed Carvings at 5:27 PM No comments:

It's time to share one of Duff's drawings with you.  The owner of these, Jay, wrote to me in December of 2016, but only just realized today that he had not clicked "send" on his reply to me, so he just replied today. Thank you Jay!

Jay's father knew Duff Tweed and apparently Duff drew these for Jay and them put them away in a 1967 Dodgers Yearbook.

Here is Jay’s story as it was shared with me:

I was going through my Dad’s estate and among the multiple of collectibles he had, I found a Duff Tweed drawing that my dad had placed in a 1967 Dodger Yearbook.

I am guessing it was drawn for me on a piece of lined notebook paper... not signed but printed his name “Duff Tweed was here.  Big. Deal.” and then had his phone #.

My dad owned a packaging company in Sun Valley from 1957 till 2006, and may have met Duff through the business, but my best guess is that they probably met through the Dodger’s Stadium Club and the multiple “safari’s” they had going to spring training.

I saw your blog and figured I would reach out and see if you thought it had any value and if you are not interested, maybe give me an idea if it would have any value other than sentimental.

I can send you a scan of it if you would like. More or less I was just reaching out initially to gauge interest.

Hope to hear from you,


These drawings are what Duff typically drew on the back of some of his carvings.  Neat to see them done on a piece of paper still very much in tact.  So, without any further fanfare, here are Jay’s Disney character illustrations done by none other than the man himself, Duff Tweed! 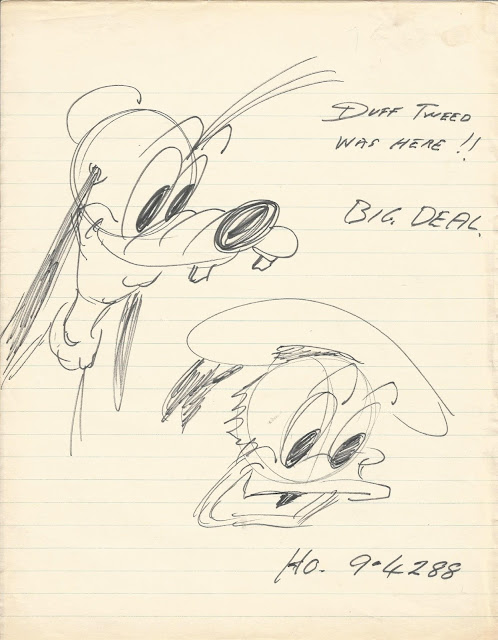 I know I was long overdue to post here, so it's funny that a collector who originally wrote to me over one and a half years ago sparked the creation of this post, today. Want to send a huge shout out to Jay Jackson for sharing his cool Duffy illustration with the world! Awesome Jay!

Hope you are all staying cool as we are experiencing a heatwave across the United States. Be happy, be safe and enjoy life to the fullest!  Be back soon!

Joe
Posted by Duff Tweed Carvings at 4:21 PM No comments:

Welcome back to one of several overdue blog posts.  We're starting with the most recent seen and will work our ways back.  Before we get started, wanted to wish each of you a Happy New Year full of promise and hope.  Stay positive and focused this year.  May it be a great year for all!

We had the wonderful pleasure of meeting a Facebook friend, Andrew, in person at the end of 2016.  We became friends on Facebook as he found our Duff Tweed profile there.  We have enjoyed seeing heart warming posts about him and his family.  He always seemed like such a loving person and when he contacted me to sell his Slaughterhouse Four set of carvings, I couldn't resist the opportunity to meet.

Our original intention was to sell the set to a fellow collector and friend, but there was something special about this particular set, so even though funds have been tight, we extended ourselves to add this particular set to the Duff Tweed Carvings collection.  Happy Holidays to us....LOL. :-)

Andrew had seen the set of four carvings hanging in his grandmother's house for years, as far back as he can remember.  Once she passed on, he, like many of our collectors and owners inherited the set of four.  We were once under the impression that the Slaughterhouse Four was a very limited set of carvings, but as time marches on we have uncovered several surprise sets.

What we found of particular interest was a sort of serial number etched into the top of each frame in this set.  In all our days of collecting and reviewing Duff Tweed's individual carvings, we have never seen such numbers.  They look to be original and authentic serial numbers carved by Duff himself. What also caught our attention was the hard wood back grounds (only seen from a rear view) on which the carvings were placed, as opposed to the normal material used as support behind the linen back grounds typically seen with these carvings. The wood carvings also appeared to be slightly lighter in color than many of the previous Slaughterhouse Four sets displayed in this blog. Additionally, they each come on the wormwood frames Duff used on several of the Slaughterhouse Four sets. One of the carvings displays Duff's signature with an explanation of the four carvings where he shows his appreciation to the buyers of his art. We have included that description in several past blog entries related to the Slaughterhouse Four, if you wish to go back and read it.   Just a lot of character in this set of four! 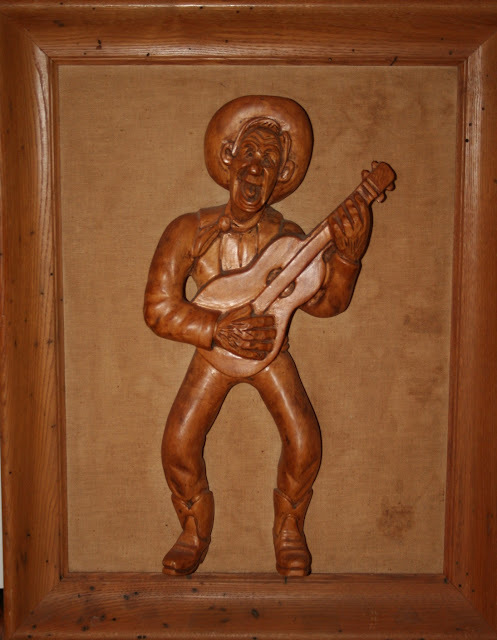 We thought you might like seeing the serial number that appeared on each individual carving in this set: 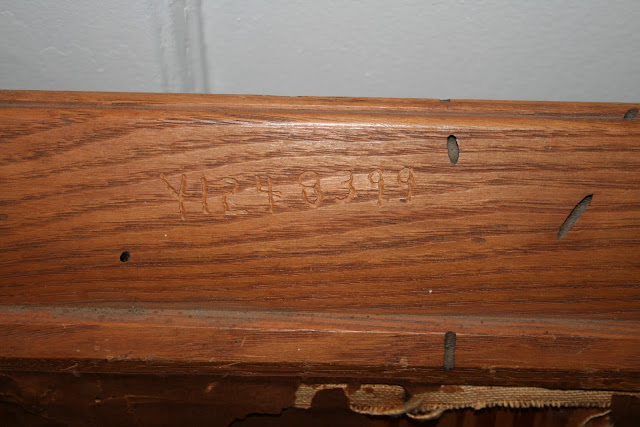 So, with great pleasure we're sending this shout out to Andrew here in Southern California, for not only sharing his long owned family set of the Slaughterhouse Four, but for allowing us to include it in the Duff Tweed Carvings collection.  Andrew made it a point to let us know he wanted the carvings to go to someone who would appreciate and care for them as his grandmother did.  Well Andrew, they have found the perfect home.  Thank you!!!
That's it for now.  Hope you enjoyed this post and I promise to write more often this year.  Let's make it a Duffy year to remember.